It was day 23 of The Big Walkabout tour and that meant only three days remained before I would be departing from the wonderful new friends I had made and heading off onto my next adventure.

We were currently in the Aboriginal lands of Kakadu National Park and had just embarked on an Aboriginal Rock Art Walk with incredible views.

Our final activity of the day was the Yellow Water Billabong River Cruise. Our guide, Travis supplied us with interesting information on his Aboriginal ancestors and was very knowledgeable about the wildlife inhabiting the river.

We saw red-tailed black cockatoos, which looked very exotic, as well as pygmy geese swimming in the buffalo grass. There were many tropical plants and animals in the river including the following, which we were lucky enough to glimpse: freshwater mangroves, lotus lilies, Pandanus trees, a paperbark tree (which had been burnt in a fire four years ago), bamboo (which the Aboriginals would use to make rafts), a buffalo, kingfisher birds, black-necked storks, jacana birds, a snake-necked darter bird, a brolga bird, magpie geese, file snakes (two of which Travis brought onto the boat) and some of the river’s 400 crocodiles. 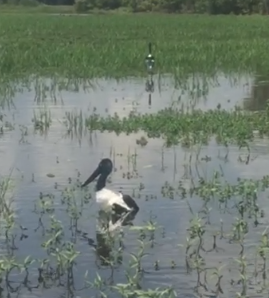 Travis told us that the Aboriginals used to make dugout canoes and I pictured them looking similar to the ones I had ridden in Botswana. Our guide also informed us that there are six seasons in Kakadu, all with Aboriginal names which I found very interesting:

We heard another fascinating Aboriginal Dreamtime story about mother nature, Kunapipi who wore seeds in her hair. When she shook her head the seeds would fly and turn into men, women and animals. She is believed to be the creator of everything and wherever she walked the rivers would follow.

The rest of the day passed by in a flash and we were leaving Kakadu the subsequent morning and heading to Darwin. We stopped off to see some enormous cathedral and magnetic termite mounds. The cathedral mounds can grow up to seven metres high. The Aboriginals were very deft in their use of nature and would utilise termites for both food and medicine. 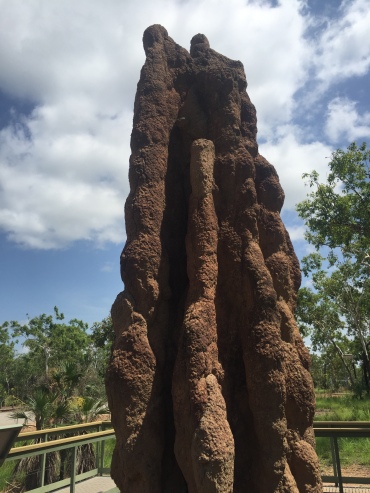 Our next stop was Litchfield National Park. It became a national park in 1986 and is approximately 1,500 km² in size. It is home to the beautiful Florence Falls, where we went for a swim and cooled off from the intense Northern Australian heat. A few of us tried to get onto a rock for what looked like an incredible photo opportunity, but try as we might most of us couldn’t hoist ourselves up! Nonetheless, the falls were lovely and very picturesque, especially when viewing them from an overlook near the top. 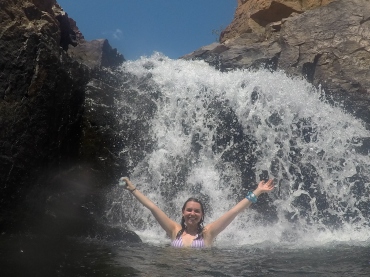 After our swim we sat by the waterfall and ate wraps, drying off almost instantly. Then we continued on our journey, driving past Charles Darwin National Park.

Eventually we arrived into Darwin, the capital city of the Northern Territory. We were informed that the Dutch were some of the first settlers and that they were not wanted by the Aboriginals. This didn’t stop the British from later inhabiting the area and naming it after Charles Darwin. In 1869 it became a city and a lot has happened since its formation. Over 200 people were killed in 1942 when Darwin was bombed by the Japanese and in 1974, Cyclone Tracy devastated the city and is still to this date Australia’s worst national disaster. However, Darwin has recovered miraculously since the cyclone and now has a population of 146,000.

We checked into our hotel and I had my own room for the night! This was the first time I had a room to myself since I started my travels, so it was really great to have my own space.

Our final night as a group comprised of free pizza and drinks at Monsoons Restaurant and Party Bar. I sang karaoke (at the request of my tour friends) and this was the perfect sendoff from my month in Australia.

The following morning, our tour friend who worked as a chef, very sweetly offered to make us all a breakfast of French toast with lemon drizzle and blueberries (with our trip manager’s cooking equipment in the hotel room!). It was delicious and we definitely saved the best breakfast until last.

We drove to a viewpoint of East Point. Cassie told us that it was normally beautifully blue, but we had a very cloudy day so it wasn’t as scenic.

We then went to the Museum and Art Gallery of the Northern Territory. We saw some taxidermy and skeleton animals, and a harrowing exhibition on Darwin’s devastating cyclone.

We were told that we must not swim in Darwin as there are crocodiles in the water. Speaking of crocodiles, our final destination of the tour was to Crocosaurus Cove. A few of us had decided to partake in the “Cage of Death” activity, where we would be swimming with the big beasts.

We signed our lives away on the waiver and watched a feeding and information walk and talk led by the keepers. Then it was time to immerse ourselves in the pool… We were paired up and my partner and I climbed into the see-through tank whilst it started filling up with water. We were initially put in a tank with a crocodile named Leo and he made my friend scream rather emphatically because he came so close to us. Due to the fact that he was so riled up, we were then moved into Will and Kate’s tank (named after the royal wedding and previously called Houdini and Bess). The keepers fed Will right next to our little glass cylinder and it was fascinating to observe him so close up. This was certainly an exciting and adrenaline pumping activity.

We were then asked to assist in a photoshop job that one of the employees of Crocosaurus Cove was compiling. He used his clever cropping skills to make it look like we were feeding a crocodile. 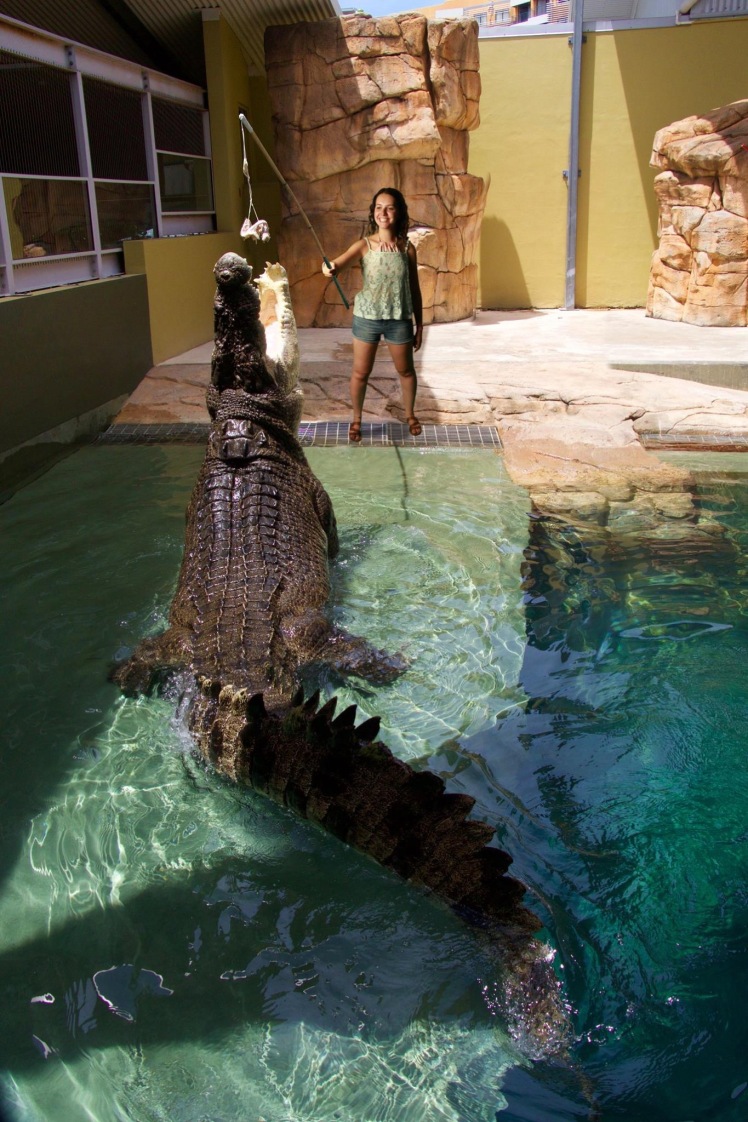 After leaving the crocodiles behind, we went for a well-earned lunch at a Mexican restaurant (I will miss the vast number of Mexican fast food chains in Australia, where I had many delicious burrito bowls!) and finished this off at Cold Rock Ice Creamery, a popular Aussie chain.

I was supposed to be staying at a Backpackers’ hostel that night, but I was very lucky that one of my tour friends let me share her room in the same hotel we had stayed in the previous night. Then those of us who had not yet departed went out for dinner and drinks.

The bar had a merry-go-round!

My final day in Australia comprised of tasting one of Darwin’s finest burgers, exploring the city centre, going out for drinks with some of the fantastic friends I had made, along with our wonderful trip manager, and swimming in the hotel pool where some of our friends were spending their remaining nights. I couldn’t have asked for my final day in Australia to have been any better. 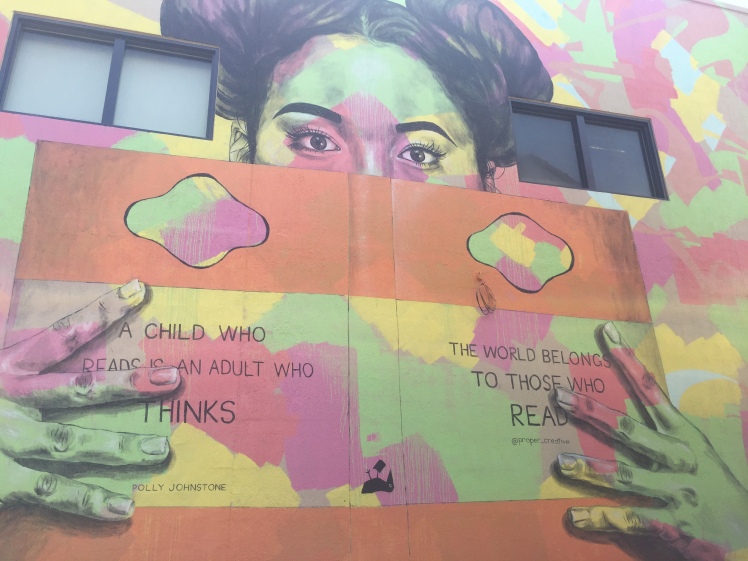 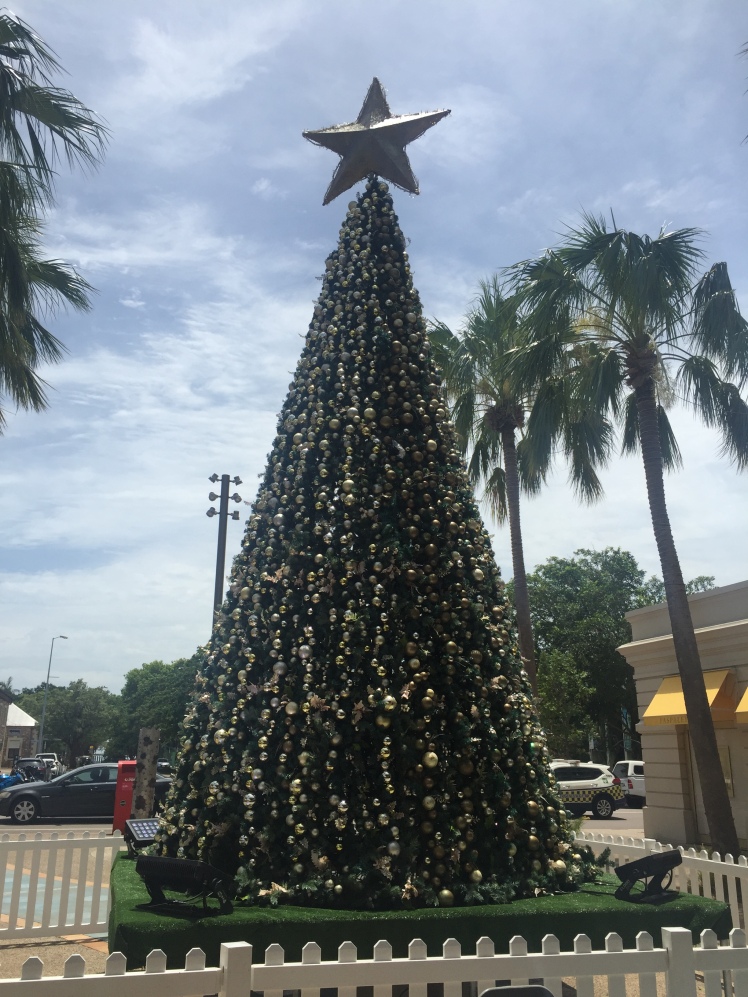 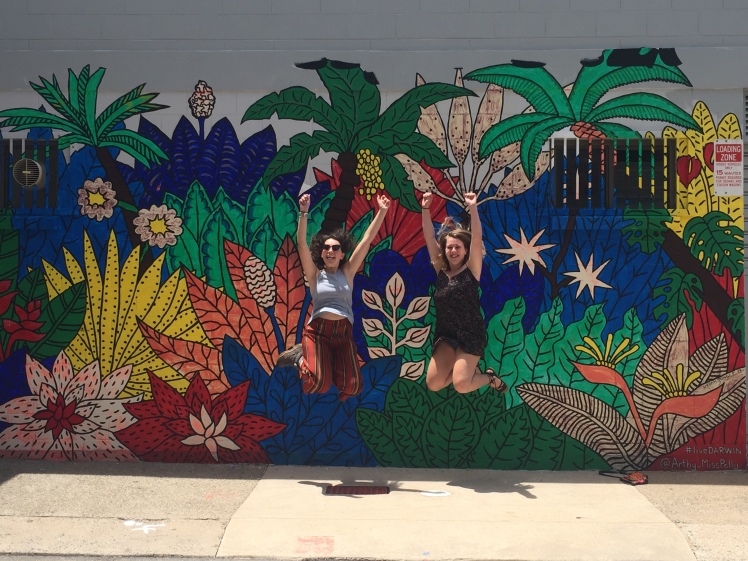 After an annoyingly delayed flight, I departed amazing Australia and headed to Auckland for my next adventure! Watch this space to find out all about New Zealand…
And in the meantime, why not view my stunning 360° virtual tours taken in Aus!

Click here to view my 360° tour of Lake McKenzie on Fraser Island.

Click here to view my 360° tour of Whitehaven Beach from the Hill Inlet lookout.

Click here to view my 360° tour of the Field of Light Uluru.

Click here to view my 360° tour of sunset at Uluru.