I had finally made it to New Zealand! A delayed flight from Darwin to Sydney meant that I had to run as quickly as I could (when I wasn’t being held up by security) to catch the second flight to Auckland. The flight attendant was surprised to see me as they didn’t think anybody from my flight would make it. A few of us did however, but unfortunately our bags were less timely and they did not board the second flight.

I was told I would have my luggage back that evening or the following day, but instead I got it back three days later when I was in my next location. Not the best start to the trip, but one I conquered with a quick visit to a shop that seemed to sell everything, for necessary supplies.

Here in New Zealand I would be travelling with the Kiwi Experience. They are a hop-on, hop-off bus tour, with recognisably bright green buses manned by local driver guides. They help you plan your itinerary based on where you would like to visit. I had five weeks in New Zealand, so I undertook their “Whole Kit & Caboodle” tour around both the North and the South Island. Each time you rode the bus, they would offer to book your accommodation for your first night in each town or city. This was handy because it was a flexible way to travel around the country, whilst knowing you had a place to stay and transportation to your next destination.

The day I touched down in New Zealand it was early evening and I arrived into my first hostel in Auckland. I was thankful it was only for one night as it was pretty run down and dirty! I walked around the city centre and was pleased I would be back here (though I hoped in a different hostel) in a few days to explore properly.

The next morning arrived quickly and I boarded my first bus to Paihia, a town three hours north of Auckland. I was surprised to see one of the travel agents I had met whilst booking my trip with STA Travel. What a small world! It was nice to have familiar company in this brand new country, where I was without most of my home comforts whilst my bag flew through the skies without me.

Our first driver guide was friendly and knowledgeable and he plied us with information on his country during our journey. Auckland is New Zealand’s largest city and is known as the “City of Sails” because it has more boats per capita than anywhere else in the world; in fact one in four households in Auckland own a boat. Furthermore, 1.6 million people live in this city, which is a third of New Zealand’s population.

Whilst there are only 4.5 million people in New Zealand, there are 30 million sheep (perhaps it is the southern hemisphere’s version of Wales!). We drove past a dairy factory and were informed that New Zealand produce a third of the world’s dairy due to favourable natural conditions for dairy production.

Whilst Zealand means “Land of the Sea” in Dutch, the country’s Māori name is Aotearoa, which means “the land of the long white cloud”. The Māoris are Polynesian in origin and they came from Taiwan and settled in New Zealand between 1320 and 1350. They saw an enormous cloud over the country and knew there had to be land underneath (as the humidity from land below makes up the clouds above) and this is why they named this new place “Aotearoa”. They would have initially sailed to Papua New Guinea, Fiji, Vanuatu, Hawaii and other islands and were skilful warriors and sailors who travelled thousands of miles by canoe, using plants and stars for navigation. They were certainly an impressive people and I was fascinated to find out more as the trip continued.

We stopped off at Whangarei Falls on the Hatea River before arriving into Paihia, which means “good here” in Māori.

Arriving into our accommodation, I took the time to explore Paihia and relax on one of the beautiful sandy beaches. That evening the hostel organised a barbecue so I got to know some other friendly travellers, and we played cards in the hostel bar. One of my fellow Kiwi Experience passengers even gave me some mini toiletries that she could spare (as I was without luggage at this point). 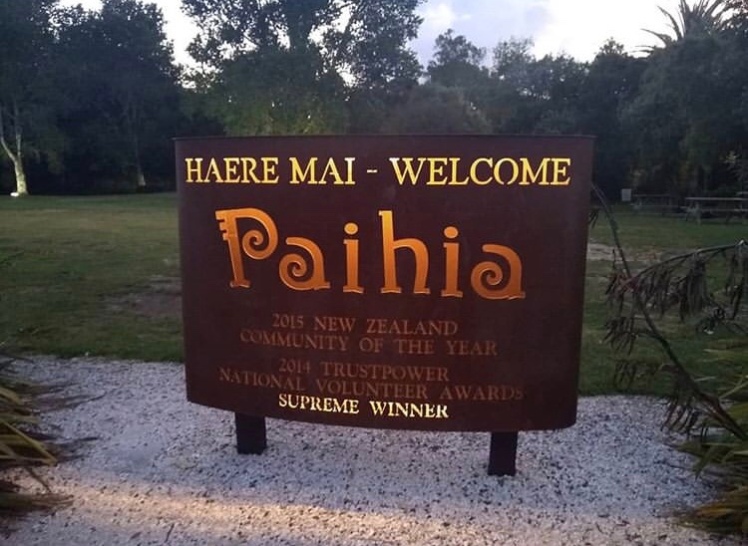 The next day I had booked to go on a boat trip around The Bay of Islands. Unfortunately though, nobody else had signed up for the excursion and it was therefore cancelled. This was a real shame, but I instead walked to the Waitangi Treaty Grounds, where the signing of the first agreement between the British Crown and the Māori people took place.

Following my walk to the treaty ground, I arrived back into the town centre and was notified that my luggage was on its way whilst I was eating ice cream and reading in the sunshine. It was a great way to end the day, and tomorrow I would be embarking on the Cape Reinga day trip.

I was picked up by driver guide, Gareth and along with a few other travellers (sadly nobody from my hostel was on this trip), we set off for Cape Reinga, the northwesternmost tip of the country.

It took us just under three hours to reach the Cape, but we stopped off along the way to view some other highlights. Our time on the bus (known as a “steel waka” in Māori) was spent learning some interesting history of New Zealand.

The Bay of Islands is an enclave which encompasses more than 140 subtropical islands. It was first visited by Captain Cook in 1769 and he was the first European to visit the far north of the islands. Abel Tasman was the first European in New Zealand though, and in 1642 he arrived with his crew, only for most of them to be eaten by the Māoris! The latter were cannibals, mainly due to the fact that there were not many animals to eat here, but also because they believed they would gain power by eating their enemies.

We drove through the town of Kerikeri, which means “digging” in Māori as it is very fertile land. One of the many crops that grows here is the kiwi fruit. This used to be known as the Chinese gooseberry, but the name was changed so that it was the same as the national bird. The oldest wooden building and the oldest stone building in the country are both found in Kerikeri.

Gareth narrated the Māori creation myth for us. Similar to the Dreamtime stories I had previously heard in Australia, these were enchanting tales relating to the origins of the universe: At the start of the world there was no light. The Earth Mother, Papatūānuku was joined together with the Sky Father, Ranginui in an eternal hug, and their children, who later became the gods of the Māori people, were born between them in darkness. Their offspring could not move as their parents were locked together in a lover’s embrace. They begged for space but the Sky Father said he loved their mother so much that he could not let her go.

One child decided to act on this and pushed his feet to the ground and his father up to the sky. He thus became a tree and is now the God of the Forest, with the insects, lizards and birds being his children. The Sky Father was saddened by this separation and his tears fell from the sky as rain and created oceans. Another of the children created the creatures of the sea and became its god. A third child joined his father in the sky out of pity and created wind and lightning, becoming God of the Sky. The fourth child (who was later depicted in the Disney film, Moana) brought his canoe south and it became the South Island. The only god visible today is the God of the Forest as he has become the largest Kauri tree, at around 2,000 years old. He is 52 metres tall and is the largest living thing in the Southern Hemisphere, with 50 other species living within his branches.

We saw some of these gigantic Kauri trees in the 1,000 year old Puketi Kauri forest.

We had a quick tea break in Taipa before reaching our next destination. Though actually only 54 miles long, our next stop was on Ninety-Mile Beach, a gorgeous expanse of sand that stretches as far as the eye can see.

Just inland from the beach there were massive sand dunes, formed by the wind over many centuries. It was a surreal landscape as it felt as though I was back in one of the expansive African deserts I had previously visited. There were towering hills of sand and it was the perfect place to practice sandboarding, which I had been fortunate enough to try in Namibia. The sand was very warm and we took some boards out of the bus and made our way up the dunes, slipping back down with each step. It was fun to get the chance to do this activity again and 45-minutes later we boarded the bus once more, this time covered head to toe in sand! 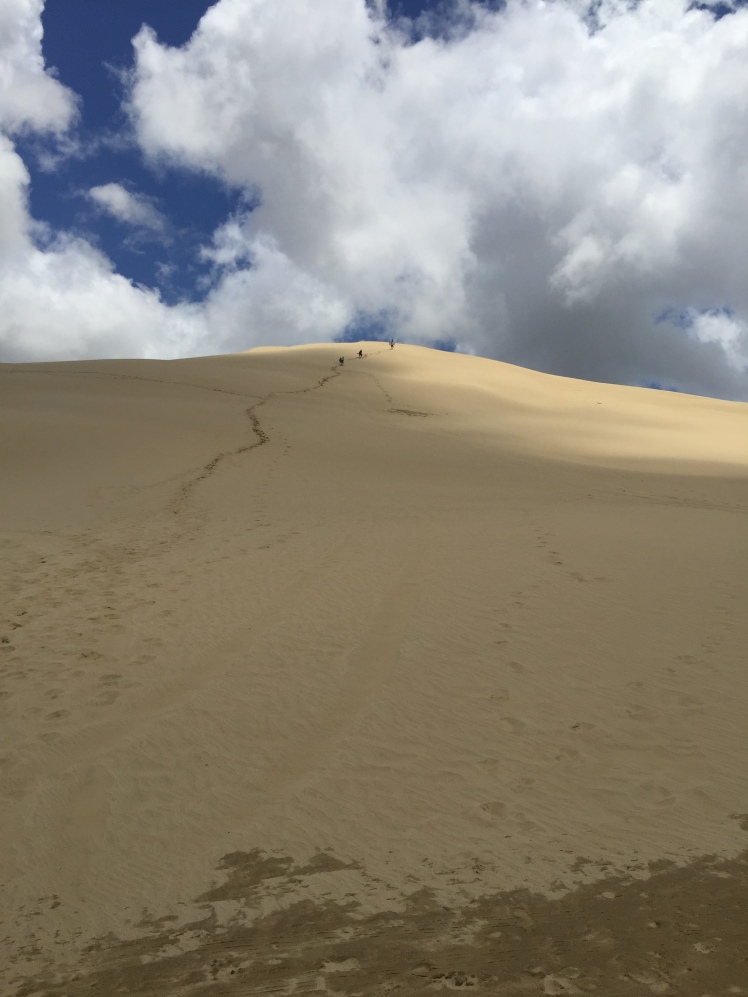 We journeyed onward and eventually arrived at Cape Reinga. We saw the famous lighthouse at the tip of the country and looked out to the point where the Pacific Ocean meets the Tasman Sea. Interestingly, I found out that a third of planet Earth is comprised of the Pacific Ocean. 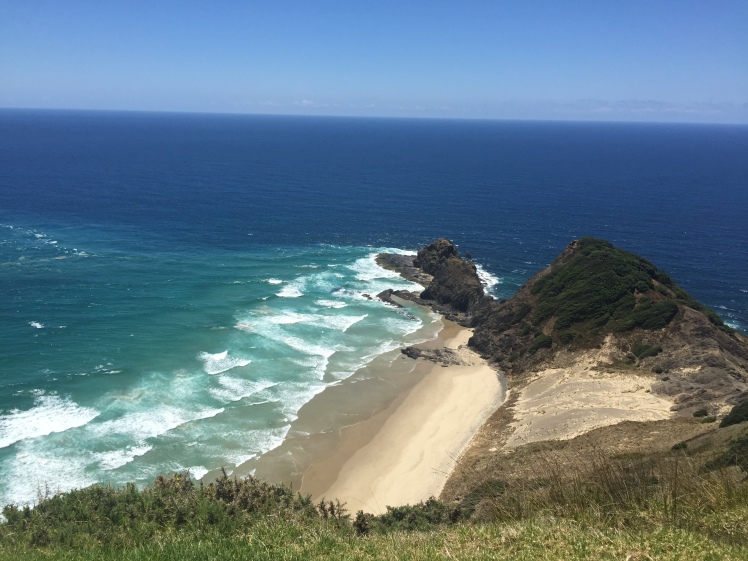 One is not allowed to eat at Cape Reinga as it is a sacred place and the Māori people do not believe you should consume food in holy places. The Māoris also believe that their spirits leave this world from Cape Reinga.

As we were all rather hungry after a full and exciting day, we began travelling back to Paihia via Mangonui, which is home to one of the best shops for fish and chips (a New Zealand favourite as well as a British one!). They were delicious and just what a Brit needed, a home comfort which I could say was cultural too.

I was also surprised to see a “Penguin Crossing” sign here, but unfortunately I didn’t spot any of these lovely creatures.

My time in the Bay of Islands came to an end and I boarded the Kiwi Experience bus back to Auckland the subsequent morning. The few days I had spent in the sunny north of the country more than made up for my lost luggage and I was excited to see what the rest of the North Island had to offer.

9 thoughts on “Kiwi Experience Part One – The Bay of Islands”