It was 22nd December and I was in the North Island of New Zealand, experiencing my first Christmas period in the summer. That being said, similar to the UK’s unpredictable weather, New Zealand’s December had a real mix of temperatures, with warm weather some days and cold rain on others. I remember it being cloudy on this day, but it stayed dry as we visited Te Puia, home to the New Zealand Māori Arts and Crafts Institute and Te Whakarewarewa Valley, which contains world famous Pōhutu Geyser and many other geothermal wonders.

We were shown around the National Schools of Wood Carving and Weaving. 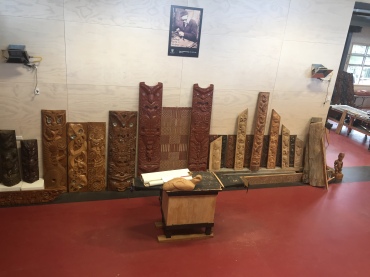 And we then walked around four fascinating geysers: The first was Pōhutu Geyser, known as the most reliable geyser on Earth because it erupts up to 20 times a day, sometimes reaching heights of 30 metres. Pōhutu means “constant splashing” in Māori. The second geyser was the now dormant Papakura Geyser, which used to erupt consistently, up to heights of three metres. Thirdly, we saw Te Horu Geyser, which has been dormant since 1972 but previously erupted up to seven metres high. It displayed new signs of life in 1998 as water in its vent bubbled and began overflowing, but so far there have been no new eruptions. Te Horu is known as “The Cauldron”, as air-cooled water from the nearby Pōhutu Geyser sometimes lands in its vent. Finally, we saw Te Tohu Geyser, also known as “Prince of Wales Feathers”, in honour of a British royal visit to Whakarewarewa in 1901, as the royal guests noticed a resemblance between Te Tohu’s plume and the feathers on the coat of arms of the Prince of Wales.

Our tour guide cooking the eggs 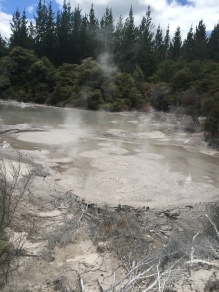 Next we saw Purapurawhetu mud pool, which means “star dust” in Māori. It produces black mud as it contains small amounts of sulphur. Its neighbouring mud pool is called Ngā mōkai-ā-Koko, which reaches temperatures of up to 95°C.

We were also guided around Ngāraratuatara geothermal hot pool, which traditionally allowed the Māori people to use hot water for cooking, washing, bathing and preparing flax. Nowadays, the tour guides show their guests a unique cooking experience called Ingo, where fresh ingredients are lowered into the boiling water in baskets woven from flax. We sampled eggs cooked in this manner.

Once our tour ended, we visited the Kiwi Conservation Centre. The Kiwi is a nocturnal flightless bird and New Zealand’s national icon and we saw them close up in a special darkened enclosure. They were of course fast asleep, but it was great to glimpse a sight of these beautiful birds and learn about the conservation initiatives being carried out in Te Puia.

We left Te Puia after a fascinating experience amongst the geothermal and natural environment and headed to Taupo, where we made our last stop of the day, to Huka Falls, after an hour on the road.

Situated on New Zealand’s longest river (the Waikato River, which we were told is larger than the country of Singapore), the Huka Falls are the most-visited natural attraction in the country. Nearly 250,000 litres of water erupt from a natural gorge every second to make up this spectacular waterfall. It was amazing to behold and I wished I was one of the white water rafters we saw being thrown around the river below us. 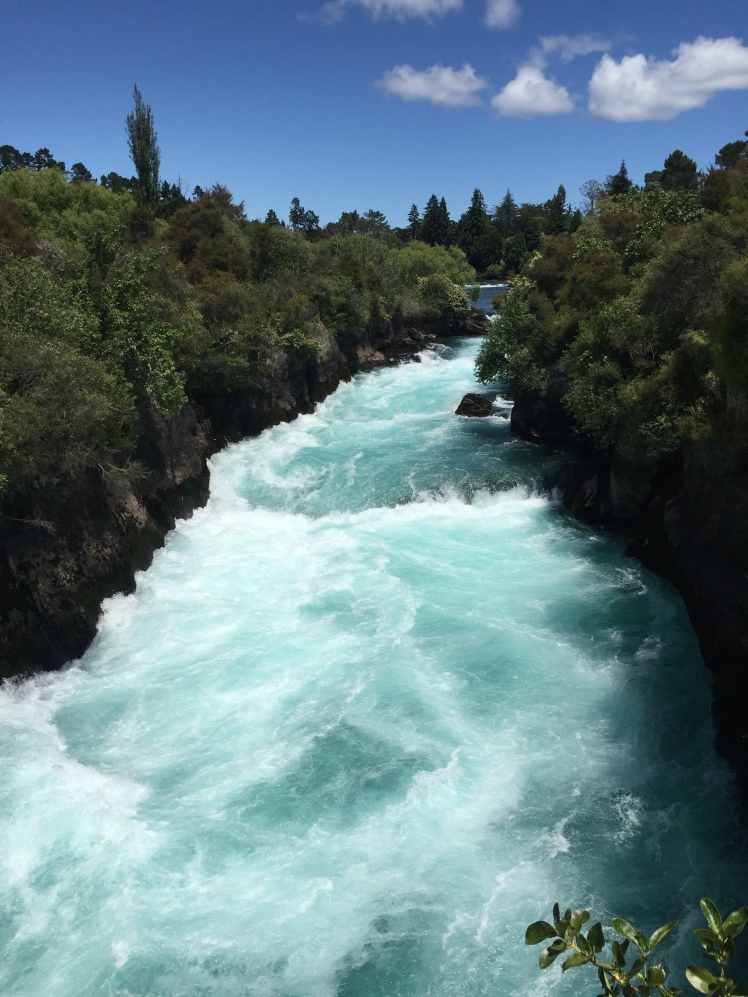 Arriving into our accommodation in Taupo, a few of us headed straight to the supermarket to buy food, so we could stock up on supplies and make a filling dinner in preparation for tomorrow’s activity: hiking the Tongariro Alpine Crossing. 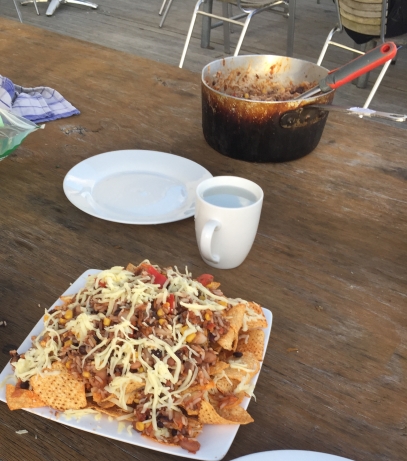 The following day began bright and early as we left our hostel at 5 am. We were fortunate that we could complete the hike in actual fact, as they only deem it safe some of the time, due to the aforementioned unpredictable weather conditions. We boarded our transfer and drove for around an hour to the beginning of the track.

This world-renowned trek is seen as a must-do for anybody travelling New Zealand and it is the country’s oldest National Park and a dual World Heritage Site. The National Park is rich in Māori culture and Tongariro has seriously impressive scenery throughout the 19.4 km hike, including the volcanic peaks of Ngauruhoe, Tongariro and Ruapehu (the latter being the largest mountain on the North Island).

The highest point of the crossing is 1,886 metres and we saw various landscapes, including steaming vents, glacial valleys, ancient lava flows, alpine vegetation and vivid crater lakes, all with stunning views. 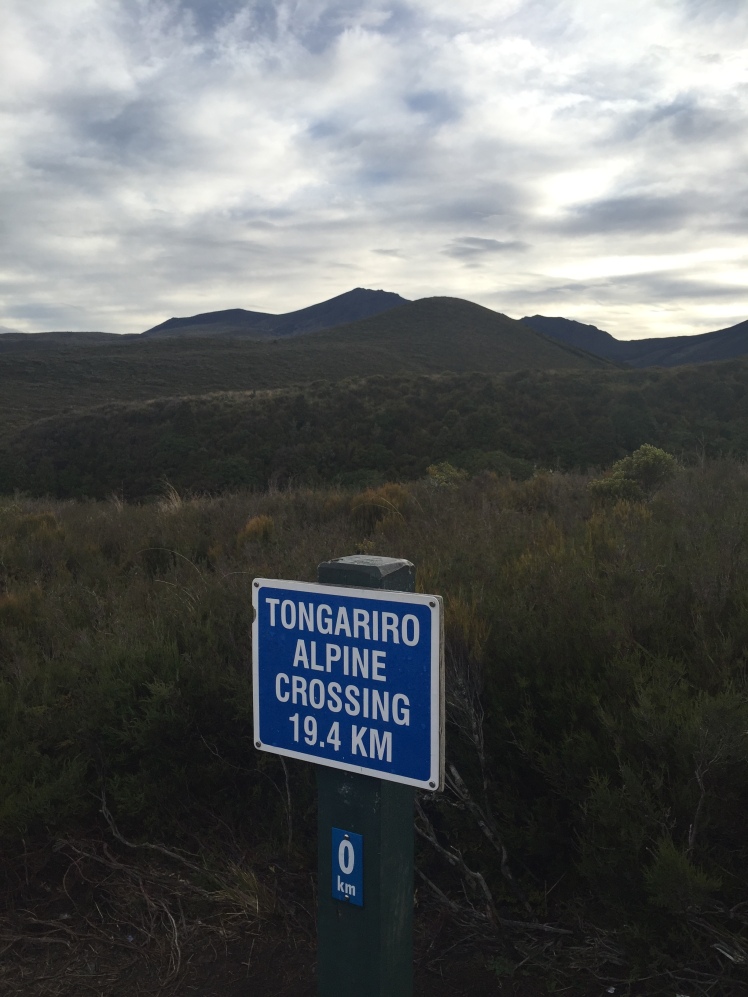 It took us eight hours to complete the hike and it was certainly the hardest, but most rewarding climb I have ever completed. There were sections where we would literally slide our way down rocky terrain, trying hard to keep upright. Other times I was huffing and puffing my way upwards and on occasion it felt like it would never end. Nonetheless, I don’t regret completing this challenging crossing, made easier by the company of the lovely new friends who joined me.

Check out my 360° tour of the Tongariro Alpine Crossing here. 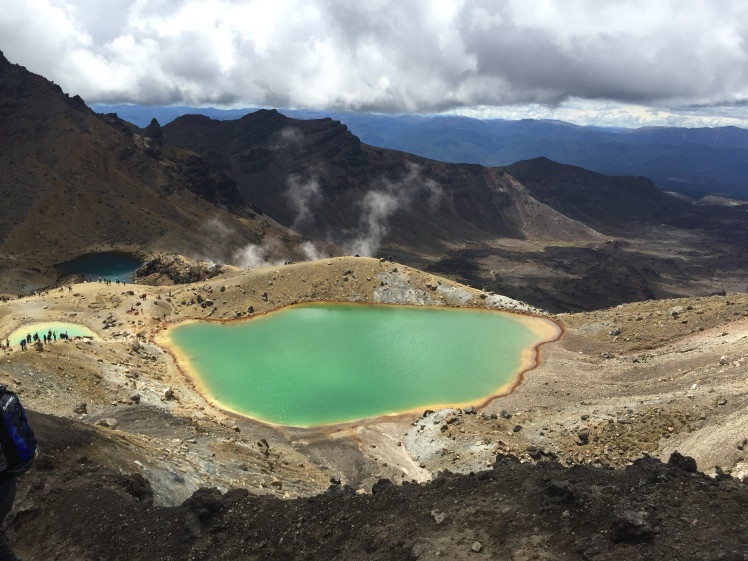 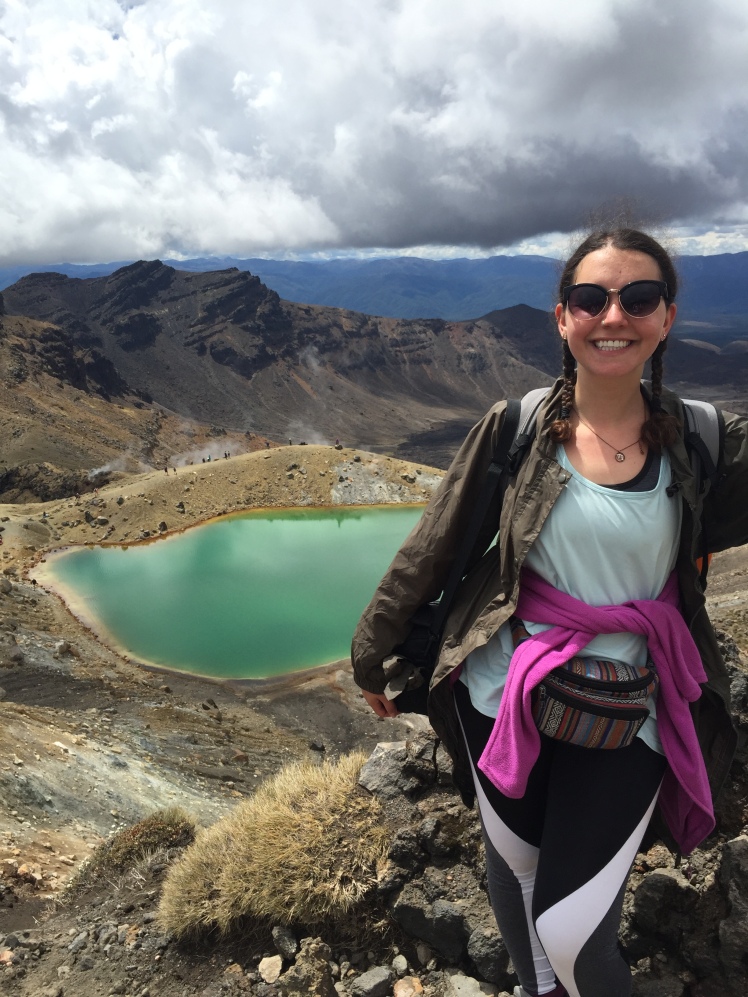 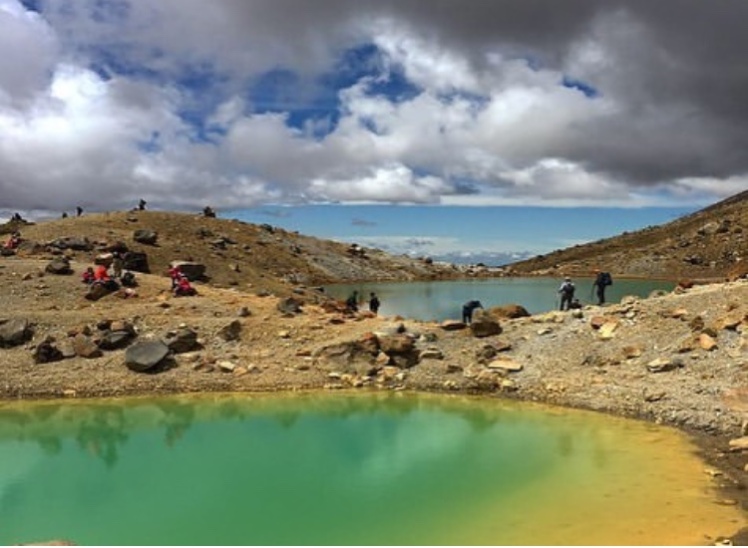 That evening, giving my blistering feet a well-deserved rest, all three of us had an early night and awoke the following day feeling achy, but proud of our achievement.
We departed Taupo and headed on the road in our signature green bus for around two and a half hours to our next destination, River Valley.

It was Christmas Eve and we relaxed in our lodge, with no phone signal and not much to do. It was a peaceful day spent playing a few games with those of us who were not going white water rafting (I decided to save my money as I had completed a rafting trip in Australia). When the rafters returned, we had a festive meal and enjoyed being merry with our fellow travellers.

Christmas Day was soon upon us and I was excited to leave River Valley so that I could speak to my family, who were 13 hours behind us and enjoying their Christmas Eve. Just as we were about to depart, our driver informed us that the bus was faulty and we needed to go into the nearest town to find a mechanic. This led to us waiting in a Wild Bean Café for a few hours, whilst the bus was being mended.

A three and a half hour journey later, we eventually arrived into Wellington in time for Christmas evening. We ate a roast dinner in our hostel and were given little presents and traditional New Zealand pavlova for dessert. This was not the sunny, Christmas day I had envisioned (it rained all day) and there hadn’t been much to do. Windy Wellington (nicknamed this for being the windiest city in the world) is usually lively at night time, but of course everything was closed on this international holiday. Nonetheless, this unprecedented day bonded us travellers and we enjoyed our dinner together. 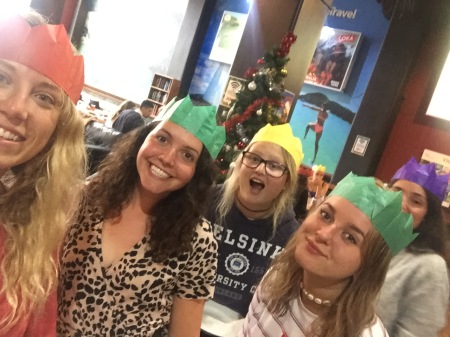 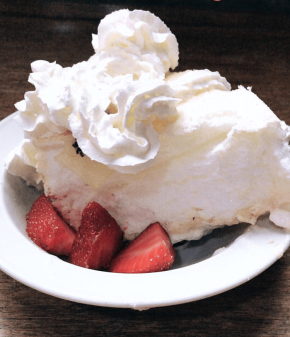 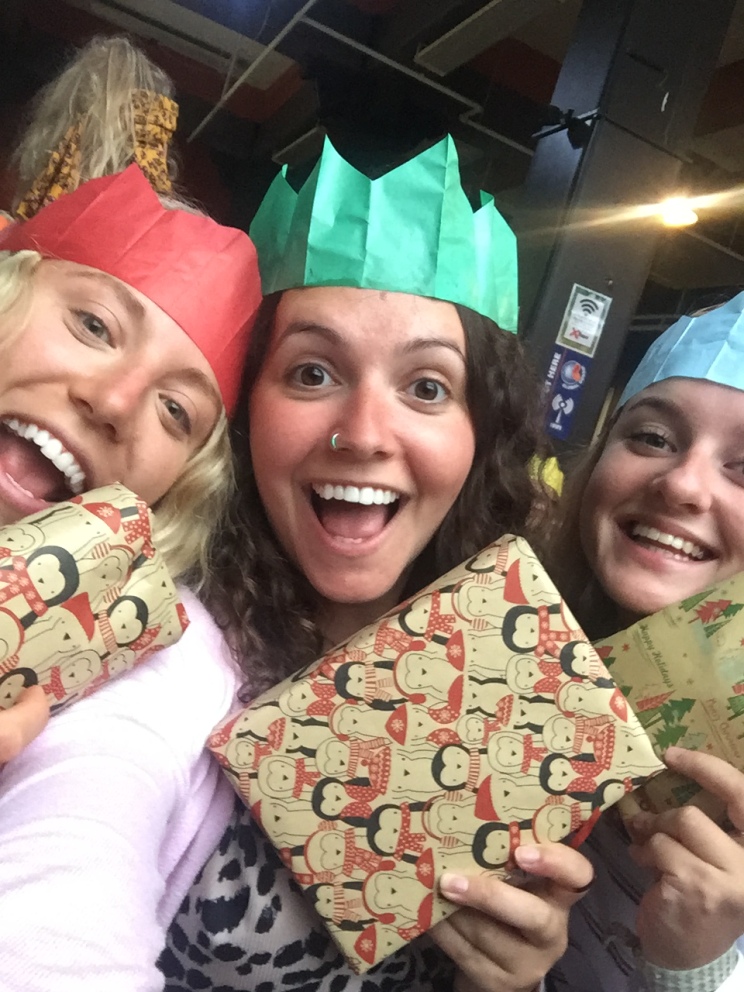 I woke up on Boxing Day pleased to be heading to the South Island of New Zealand on the ferry, for a change of scenery and to be reunited with my boyfriend the following day. We drove to the ferry port and boarded the vessel, which would take us to Picton in three hours time. The staff were evidently in a festive mood as they gave us Christmas chocolate and we settled in, ready for the journey. I got comfortable and enjoyed watching the children’s entertainer in the background, and before I knew it we had arrived onto the South Island.

We drove on a new green bus to Nelson from Picton, which took around two hours. Nelson is the second oldest city in New Zealand (after Christchurch) and is the geographical centre of the country.

Here I said goodbye, planning to meet the friends I had made in a few days time. I was staying in Nelson whilst the Kiwi Experience passengers headed to their next destination. This was because my boyfriend was flying in to Nelson Airport and I would be spending a few days here, celebrating his birthday with the surprises I had planned.

Please check out my next blog post to find out about the said surprises, and my time on the South Island of New Zealand, reunited with my boyfriend, Jonny, who I had missed for the past three months of my travels.