It was day three of my Uncover India trip and already I had been fortunate enough to see a profusion of culture, visit one of the Seven Wonders of the World and a UNESCO World Heritage Site, and taste the piquant flavours of some traditional delicacies.

We were currently in Agra, the former capital of the Mughal Empire from 1556 to 1648 and a major tourist destination because of its wonderful buildings from this era (most notably, the Taj Mahal). Much like Delhi, there was a plethora of culture in Agra, but there was also a lot of pollution and exceptionally busy streets. I think it’s fair to say that we had all been in awe of the architecture found in Agra, but we were equally excited to be heading to our next destination.

We left our hotel at around 6 am to take a seven hour bus journey to Jaipur, the capital of India’s Rajasthan state (our third state of the trip and the biggest of India’s 29 states, based on population and wealth). Taking the bus for this length of time was an adventure in itself, and I admired the scenery that whizzed past us as we saw a host of small markets, the hustle and bustle of people passing by and animals roaming around the streets. The sounds and smells of India seemed to be aromatic spices and the continual loud beeping that I was becoming accustomed to, as we travelled the 239 kilometres between the two cities. 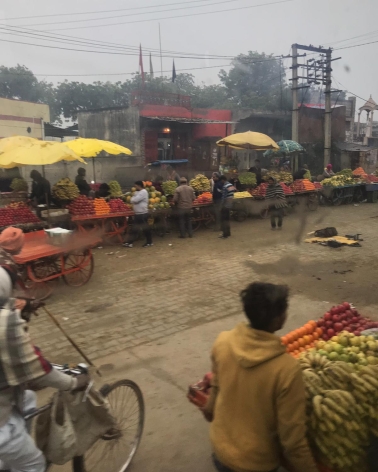 Pictures taken from the bus window! 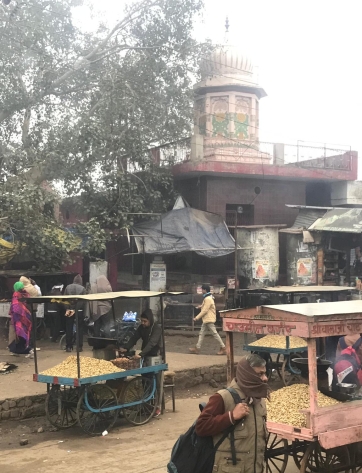 Pictures taken from the bus window!

Eventually, we arrived into Jaipur, which is known as “The Pink City” because every building within the walled Old City is painted a pink, terracotta colour. I was intrigued to find out the reason for this colour scheme, and I later discovered that it was due to the Maharaja Sawai Ram Singh II’s desire to impress Queen Victoria’s son Albert, the Prince of Wales, during his 1876 tour of India. Firstly, the Maharaja (meaning “great king” in Sanskrit) commissioned a lavish museum to be built and named after the prince (pictured below). Then he decided to beautify his city by repainting it terracotta pink, because the colour represented welcoming and hospitality.  The Maharaja’s favourite wife loved the new colour scheme and asked her husband to pass a law making it illegal for buildings to be painted any other colour than Jaipur Pink. This law was passed in 1877 and still remains in effect today!

Arriving at the Jaipur Inn, which would be our home for the next two nights, we had some lunch and took a much needed break after our bus journey, before an evening of sightseeing began. I explored the picturesque roof terrace of the Inn, played Connect Four and took a quick power nap! 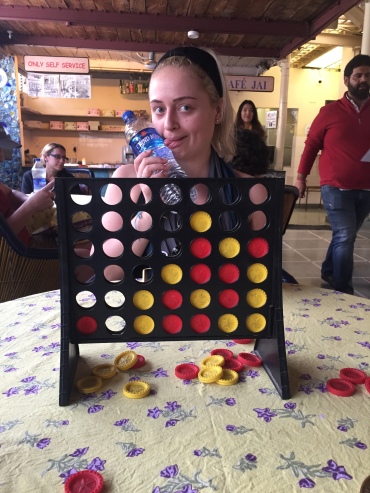 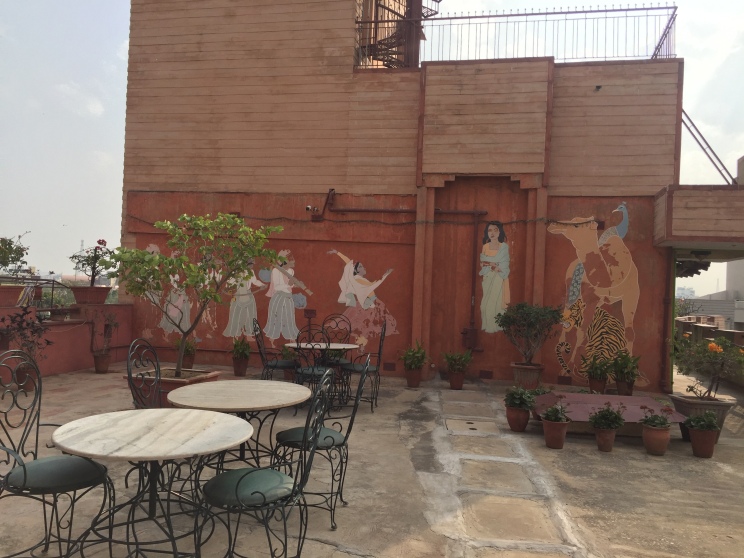 As evening fell, it was time to acquaint ourselves with some of the sites of Jaipur. We had the choice between taking an orientation walk around the Old City or viewing the Amber Fort, which we were told is the only fort one can explore at nighttime. We therefore chose to make the most of the opportunity to see the Amber Fort at night.

En route in our auto rickshaws, we stopped briefly to admire Jal Mahal, or the “Water Palace”, which appears to float in the middle of the Man Sagar Lake, a man-made reservoir created in 1596.

The Jal Mahal has five floors, but four become submerged underwater when the lake is full. The Maharaja Jai Singh II (the founder of Jaipur and the great-great-great grandfather of the Maharaja I mentioned above, who painted Jaipur pink) is said to have constructed the palace in the mid-18th century. The Maharajas would then take gondolas to the Water Palace to escape the heat and hunt the birds who migrated to the lake.

Though the building is currently inaccessible to tourists, there are plans in place to convert it into a luxurious restaurant. 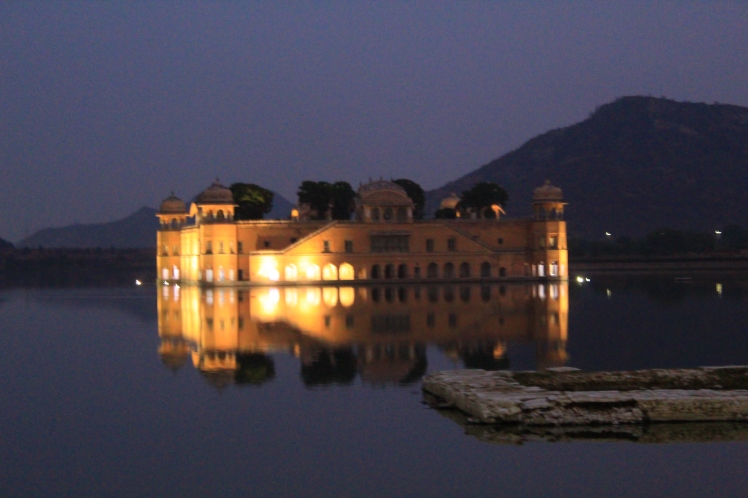 Leaving the dazzling Jal Mahal behind, we continued on to the Amber Fort. Here we met our guide for the evening, Sanjay. He told us all about the impressive place in which we now found ourselves.

Originally constructed in the 11th century (but refurbished in the 16th century), the fort is now used as a museum, with the entrance fees going to Jaipur’s Royal Family. Interestingly, the Amber Fort’s name has no relation to the precious stone or the colour, but was instead named for the Hindu god, Lord Shiva, whose local name was “Ambikashwara”.

We were able to look around the entire marble and sandstone fort, and see its four sections, each with their own courtyard, as well as halls and palaces. Sanjay was exceptionally knowledgeable and I really enjoyed learning the history of the fort and hearing about its different inhabitants.

One story that I thought was rather interesting, was about the original founder of the Amber Fort, Raja Alan Singh (922 AD). He had twelve wives no less, and in a private area of the fort he kept karma sutra paintings of each wife. If anybody else entered this section, they would have their head chopped off! 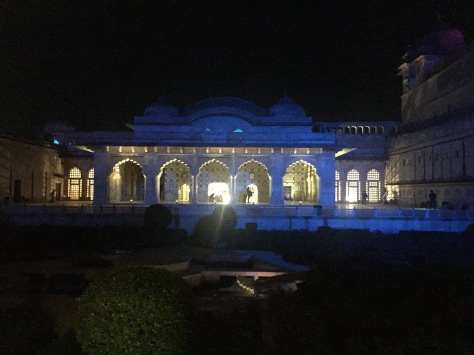 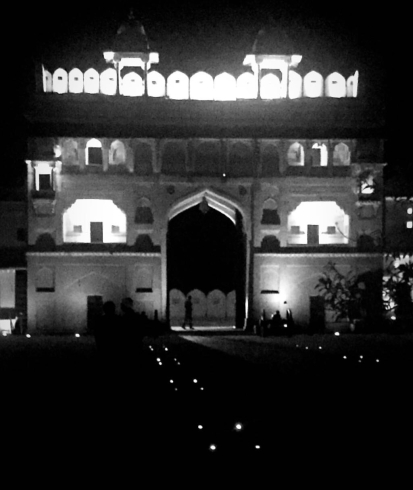 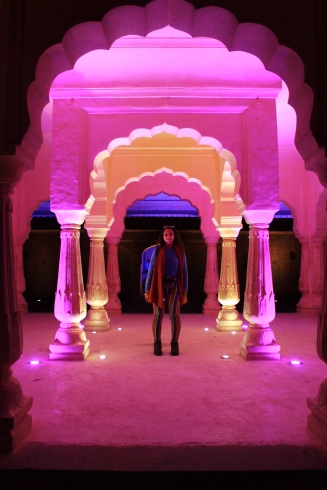 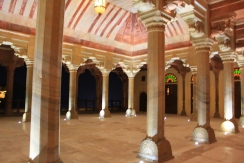 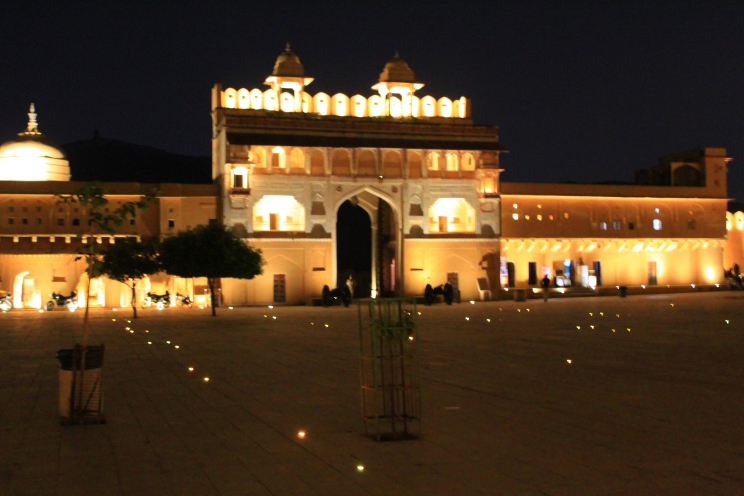 Check out my 360° tour of  the beautiful archways found in one of the courtyards of the Amber Fort.

As we left the Amber Fort on our rickshaws, I saw my first Asian elephant and admired its beauty as it passed alongside us. Sadly it was being ridden. Hopefully the request that PETA India have put forward to the authorities to ban elephant riding will come into effect really soon.

Our final stop for the evening was to a food market and open-air food court called Masala Chowk. Their aim is to bring all of the famous street food of Jaipur into one place and our tour leader, Ash, told us that it was absolutely delicious. We were all really hungry by this point and I was excited to try lots of different types of street food.

As the evening progressed, the food court became exceptionally busy, and I could see that this was a very popular place for the locals of Jaipur. I tried five pani puri, samosas with sweet chilli sauce, masala dosa (a sweet pancake), a jalebi, masala chai tea and kulfi (Indian ice cream). Ash certainly wasn’t lying when he said the food was absolutely delicious! I was in a very satisfied “food coma” after trying a mix of such fantastic, flavoursome food. 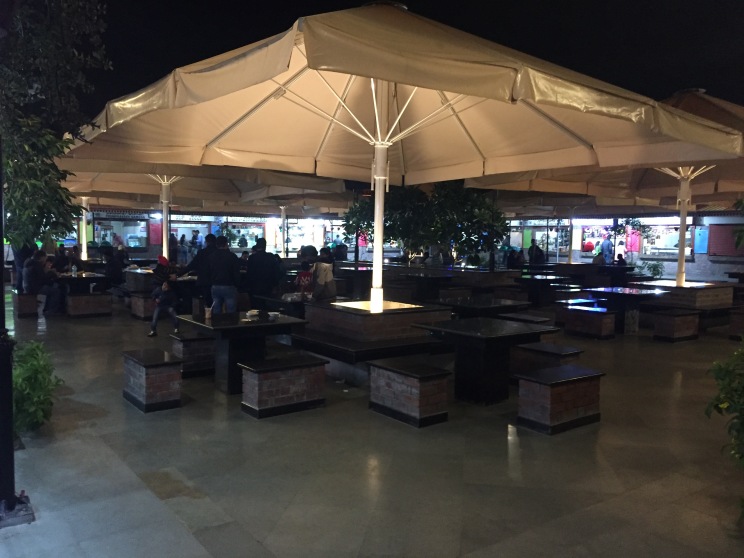 It had been a great first evening in Jaipur and the following day, we went to Jantar Mantar Observatory, with our tour guide from the previous evening, Sanjay, proudly showing us around.

Jantar Mantar Observatory holds a collection of nineteen astronomical instruments, which were built by the founder of Jaipur (as mentioned previously, Maharaja Jai Singh II).

Completed in 1734, the observatory features an enormous sundial, which won a Guinness World Record for being the world’s largest. Jantar Mantar (which is Sanskrit for “instrument calculation”) is also a UNESCO World Heritage Site.

Sanjay showed us how to use three sundials, and the largest one had a two second precision. It is called Samrat Yantra, which means “supreme instrument”.
We then spoke about the astrology and astronomy behind the huge instruments. They were each designed in order to observe astronomical positions with the naked eye, and Jantar Mantar is the most significant, comprehensive, and well-preserved of India’s historic observatories.

Though astronomical instruments have moved on to include modern technology nowadays, this glimpse into history shows the incredible skills and concepts that were present in India’s Mughal Period. 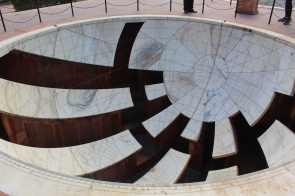 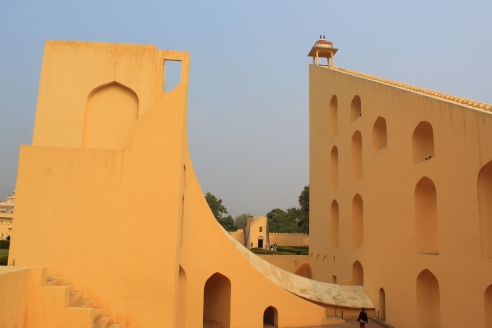 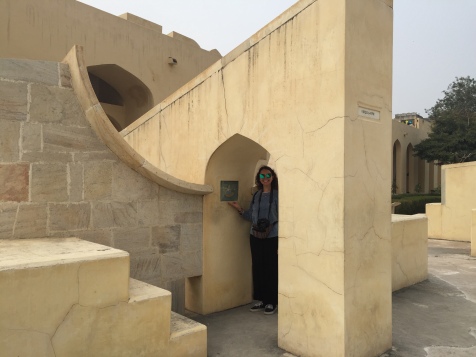 In a similar vein, our next stop of the day was to a jewellery shop, where we met with astrologer and gem stone expert, Rahul.

Those of us who wished to, had their palm read by Rahul. I made sure to take what I heard with a pinch of salt, especially as I knew he wanted to sell me one of his gem stones. Nonetheless, the findings were very interesting.

I was told that I would have money troubles later in life if I didn’t abide by the following advice: wear a sapphire in yellow gold on my index finger (it was around £300 so that was a no sadly!); don’t eat bananas on Thursdays as they belong to Jupiter and he would get angry; wear green on Wednesdays; and don’t eat any meat on Saturdays!

I did buy a ring in the end, because I found some beautiful lemon quartz and garnet gem stones and as they were only semi-precious, it was 90% cheaper than the yellow sapphire. We were each given official certificates with our jewellery (I lost one of the stones later in the trip and the company kindly sent a replacement ring to my home address. However, two gem stones have sadly since fallen out).

After stopping for a delicious lunch, we headed to a fabric factory where we were taught how to do wooden block printing. 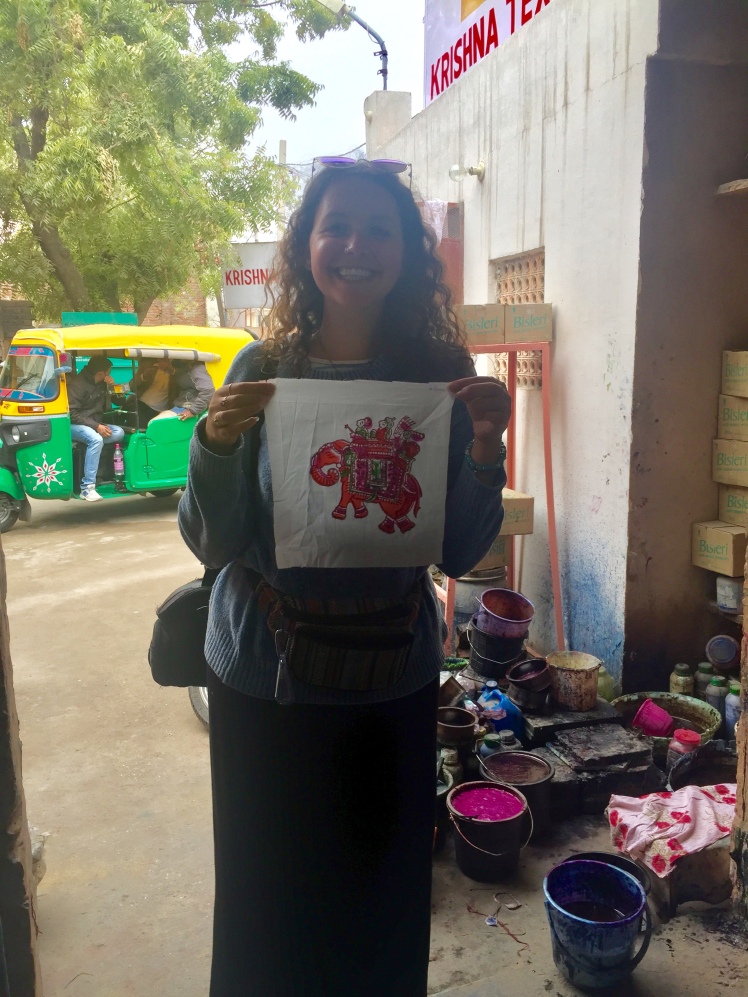 Watch this space to discover how I made this lovely elephant design. And join me on my next blog post to find out about our onward journey to the small historic village of Tordi Sāgar; a pleasant break from the chaos of our city life so far!