It was the tenth day of my ‘Big Indochina Adventure’ and I had just left the city of Luang Prabang and boarded a tour bus for a six hour journey to Vang Vieng. This small town is situated on the Nam Song River and surrounded by pristine limestone mountains and cliffs.

During the journey, our Lao tour guide, Kami, supplied us with more information about the country he was proud to call home, and we listened with fascination, whilst soaking in the serene landscapes all around us.

Kami told us about some of the different groups of people living in Laos.  The largest group are called the ‘Lao Loum’. This translates to “lowland Lao” and refers to those who inhabit the river, valleys and lowlands along the Mekong River. They make up over 68% of the population, their national language is English and they are usually Buddhist.

A much smaller group, making up just over 9% of the population are the Hmong People. They typically live in the mountains and source all of their own food by hunting meat and growing vegetables. Kami informed us that they have an extremely different culture to us. Whilst it sounds like they live simplistic, very natural lives that hugely benefit the environment, there are other factors that do not sound as appealing; for example the men are the leaders of the household and can have multiple wives, with the first wife being in charge of the others.

About half way through the journey, we stopped off for a buffet lunch in Phou Khoun, which had a beautiful observation site and “the best toilet in the world”. 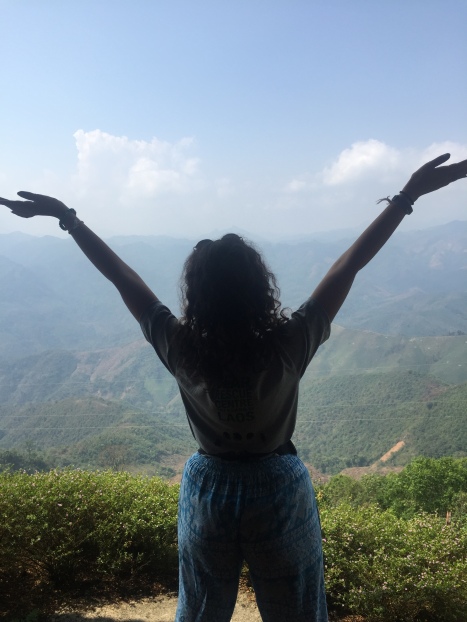 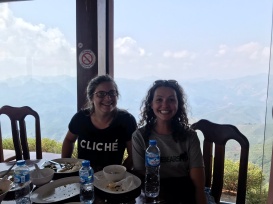 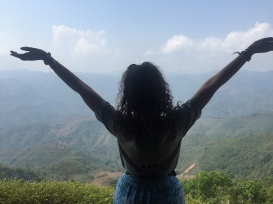 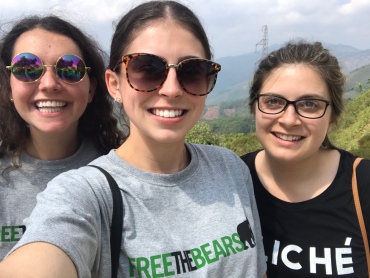 Eventually, we arrived into Vang Vieng. Though peaceful in nature, Kami told us that the town also has a lively nightlife and is popular with backpackers. It was a former party town but an increase in ecotourism has seen a rise in Asian tourists as well as western backpackers.

After a wander round the town, we met our group for dinner and drinks. 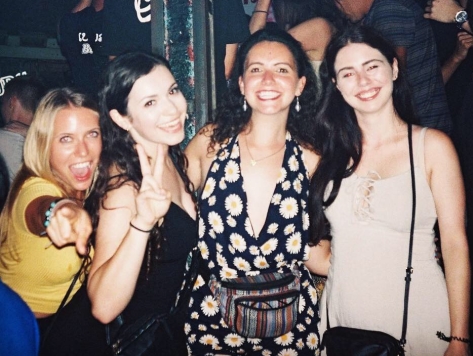 In Sakura Bar, where their slogan was “Drink Triple, See Double, Act Single”! 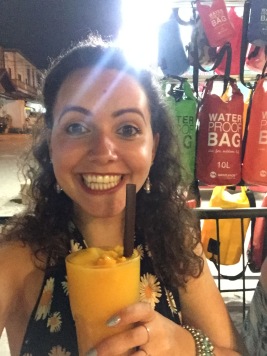 In a bar called Happy Mango, with a mango cocktail!

The following morning, we started the day with a kayaking excursion around the Nam Song River. Our tour group, Contiki, used to offer tubing instead, but this has become disrespectful to the locals as it is now known as a noisy, often drunken activity that has even resulted in the death of some tourists.

On our river adventure, we also had the chance to park up the kayaks temporarily and float on rubber rings through one of the caves, donning flashlights on our heads and enjoying the limestone landscape. The rest of the activity was spent racing in our two-person kayaks, splashing others, trying not to get caught in the reeds and appreciating the natural beauty encompassing us. 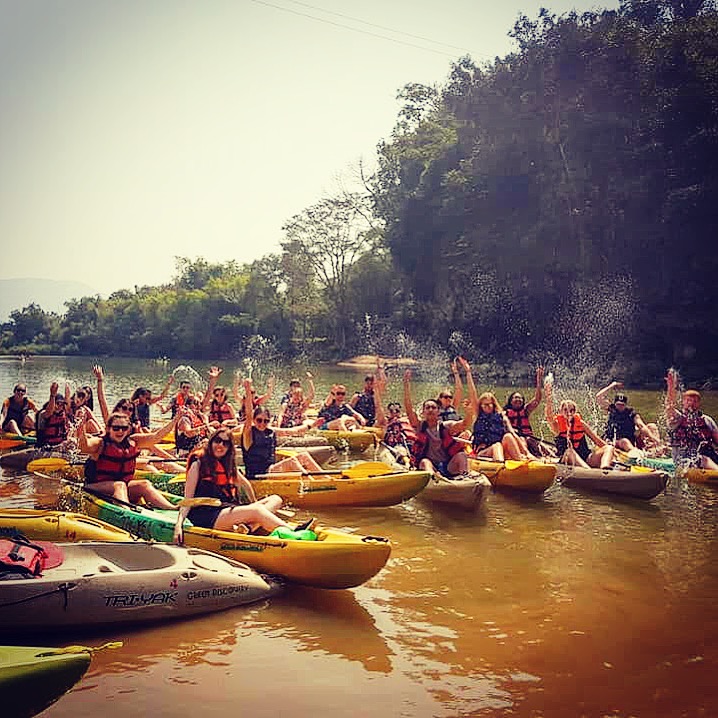 On our way to the river!

On our way to the river! 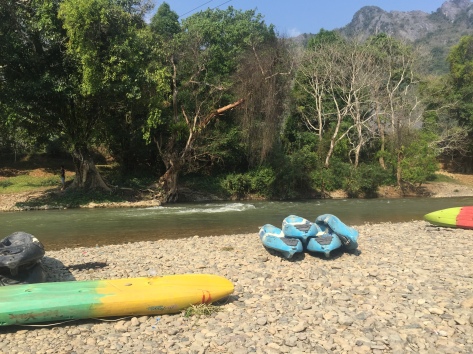 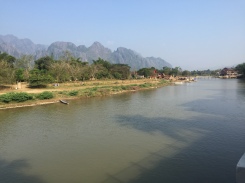 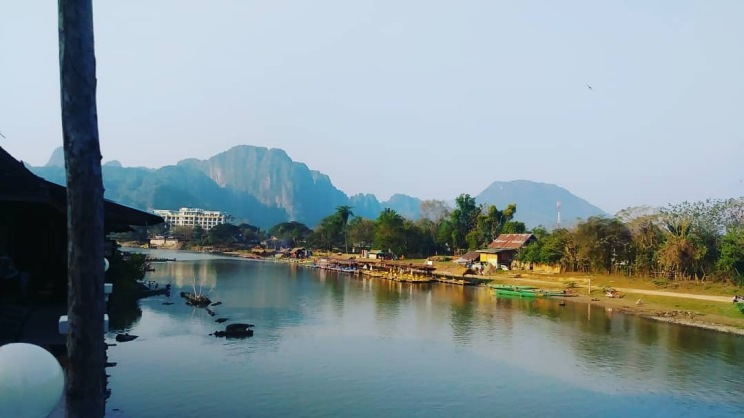 A few of us went for lunch together after the kayaking trip, as we weren’t sure where the rest of the group had gone (we later found out they had hired dune buggies and were gutted we somehow missed this!).

I then tried one of the local yoga sessions. This was a heart opening one-and-a-half-hour class, set in peaceful surroundings, that left me feeling really zen.

An exploration of the local markets followed by an evening out with tour friends ended our short but sweet time in Vang Vieng and the next day, a four hour drive took us to Laos’s capital, Vientiane.

Vientiane features a combination of French-colonial architecture and stunning, golden Buddhist temples. France’s colonisation in 1893 is viewed by most Lao people as a mix of good and bad. They helped to rebuild Laos from their time under both Burmese and Siamese rule in the 16th and 18th centuries. They created roads, schools and hospitals in the city, which benefitted city dwellers greatly but meant that those living in the countryside had to travel for days to visit a hospital and did not get an education. This was therefore one of the reasons Laos wanted independence, which they eventually achieved in 1954.

Prior to the French colonization, part of Laos was controlled by Siam (the previous name for Thailand). This began in 1694 when the Lao King, Sourigna Vongsa, died without an heir. His kingdom was split into three principalities and they began fighting to be the leader of the country. The King of Siam was then appointed to rule over Laos and he encouraged a renaissance of Lao fine arts and literature. However, he then rebelled and fought to become an independent leader of Laos. This angered the Siamese as they wanted to be in charge of their neighbouring country, and they thus killed the king. They made him a prisoner in Bangkok and gruesomely gauged out his eyes and burnt him to death, as well as burning down houses and a sacred emerald Buddha in Vientiane.

Though their history is dark and complicated, and includes a secret war (which I will elaborate on shortly), Kami told us that the people are very friendly, and we certainly witnessed this throughout our time in Laos.

Vientiane is a comparatively modern city and a railway is currently under construction that will stretch from Laos to China. This is set to be finished by the end of 2021 and will make a huge difference to tourism in Laos, as well as being one of the top four highest speed railways in the world.

Upon arrival into Laos’s capital, we took a tour of the city. Our first stop was to Pha That Luang. As mentioned above, this is Laos’s most sacred religious monument, and it is recognisable worldwide. It is a large, gold-covered Buddhist stupa. A stupa is a mound-like structure that contains religious relics and is used as a place of meditation.

It was absolutely exquisite both inside and out, and its painted interior depicted the story of Buddha. It has been rebuilt many times as it has fallen into ruin or been raided by various forces, but it originally dates back to the end of BCE, where Ashokan missionaries from the Indian Mauryan Empire were sent out by their Emperor to spread Buddhism. They erected the stupa to enshrine a sacred relic – Buddha’s rib bone, in the spot where Pha That Luang (meaning “Great Stupa”) now stands. 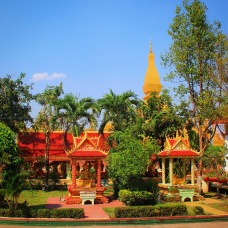 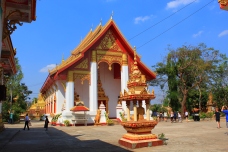 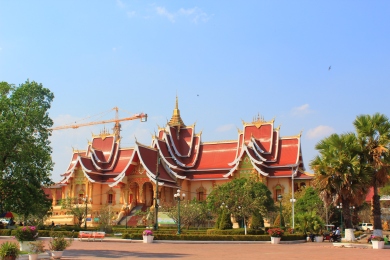 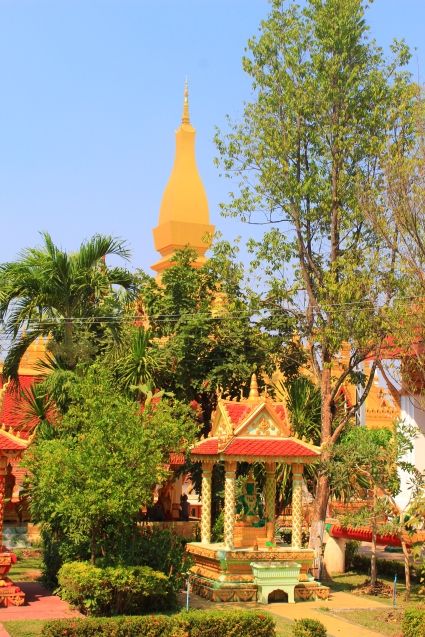 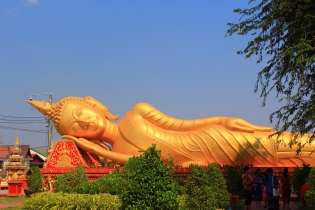 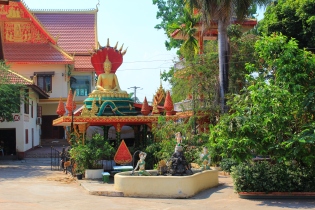 The next stop on our city tour was to Patuxai Monument. Meaning “Victory Gate”, the monument was built between 1957 and 1968 to honour those who fought in the struggle for independence from France. Though it resembles the Arc de Triomphe and is therefore sometimes called this, it is typically Lao in design and is decorated with mythological creatures.

We climbed to the top of the monument and had views of the city, including a beautiful maze-like garden directly below. 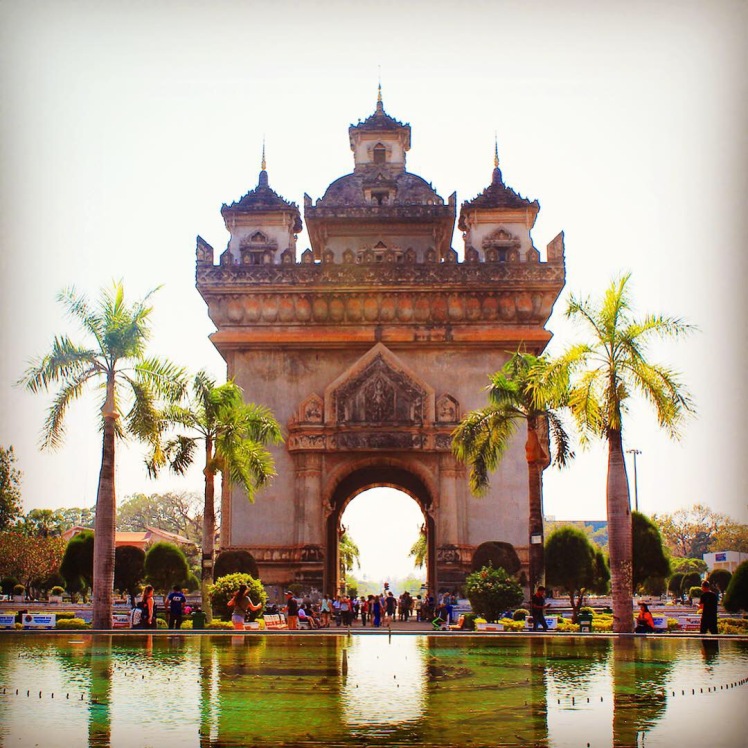 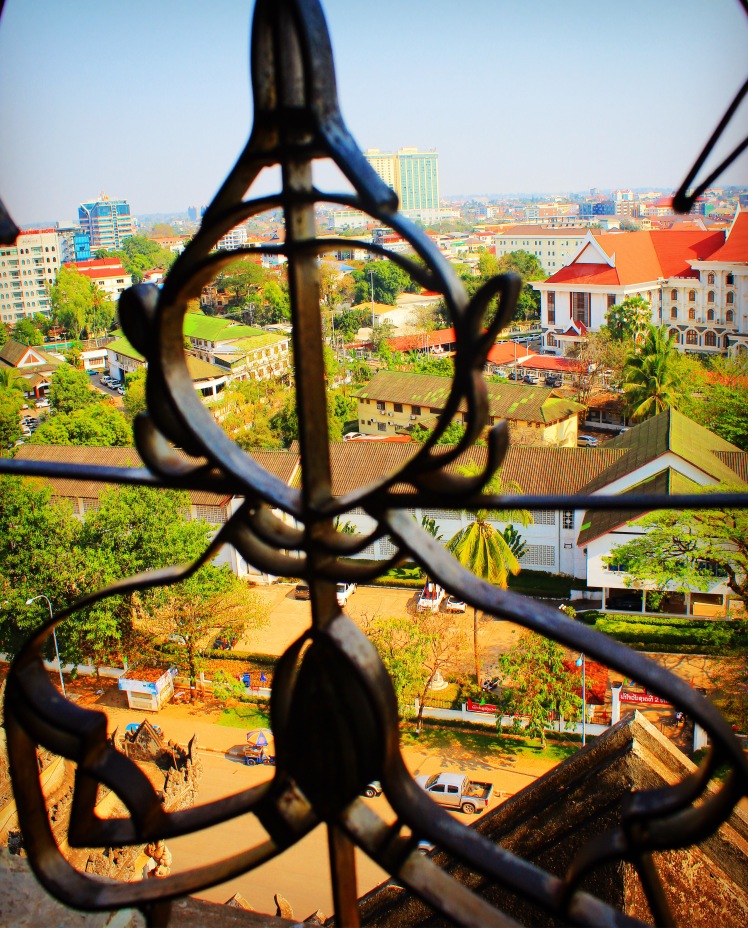 Some photos of us enjoying our time in Vientiane: 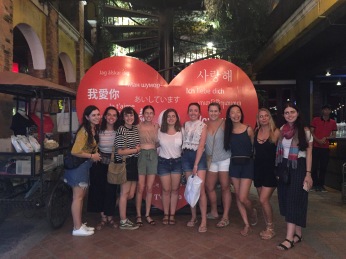 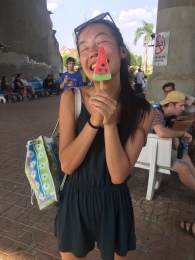 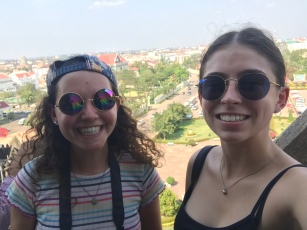 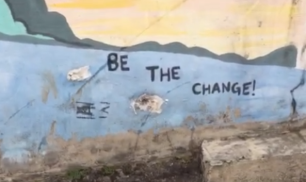 Street Art! “Be the change!” 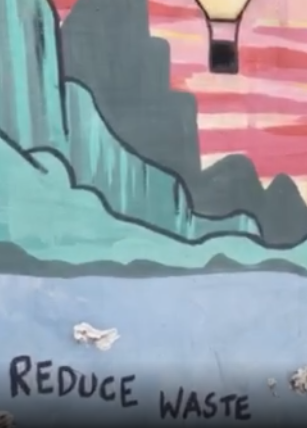 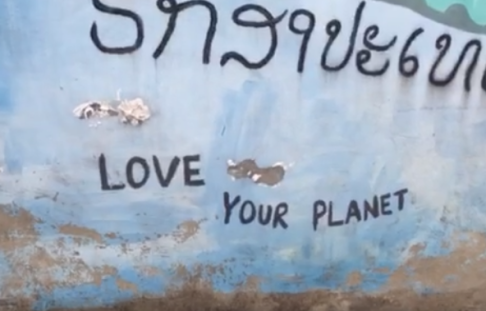 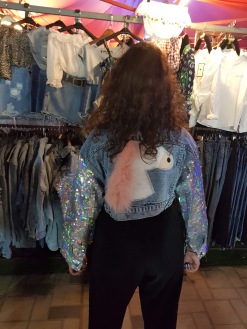 A sparkly unicorn jacket I came across in one of Vientiane’s night markets and loved! (It was so expensive, but I managed to find it online and later got it as a birthday present!)

Our final stop of the day was to the COPE Centre. Their mission is “to help people with mobility-related disabilities move on by supporting access to physical rehabilitation services in the Lao PDR.” 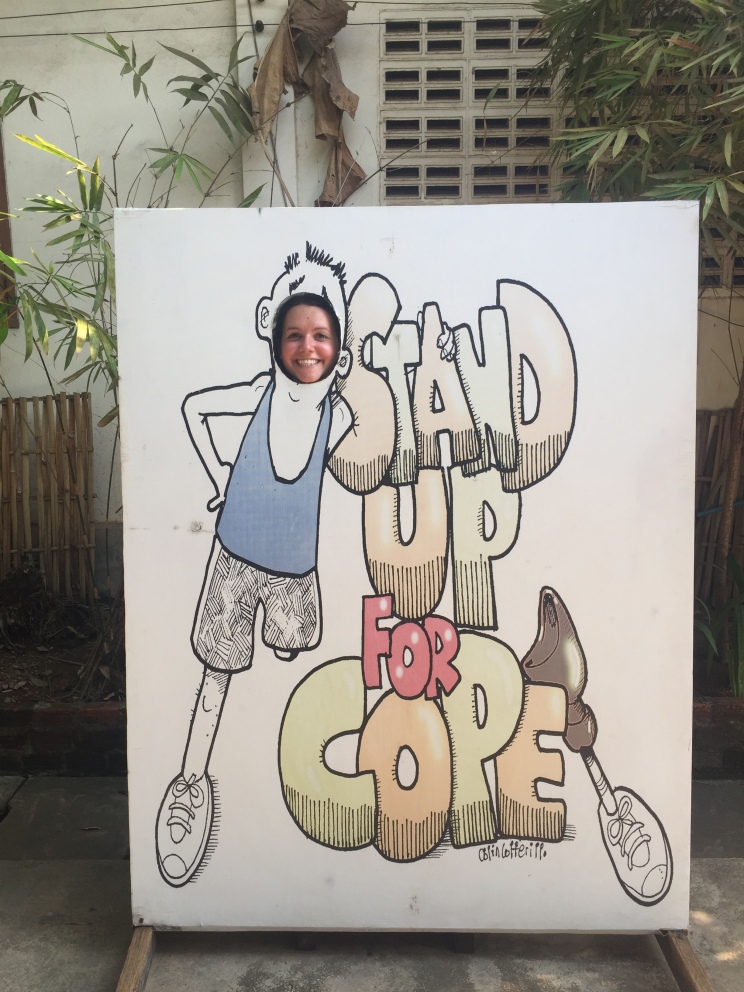 Laos is the most bombed country in the world by capita and they were affected by the Vietnamese/American war more than both countries. Numerous bombs were fired into Laos for practice, without consideration of the people living below. Some of these became buried after the war and many exploded much later and caused lifelong injuries, including loss of limbs and even death. Laos remained neutral throughout the war and yet they were the most greatly affected in a number of ways. The majority of people are unaware of this and Laos consequently refer to their involvement in the Vietnamese/American war as the “Secret War”.

The COPE Centre supports people with injuries caused by the bombs and we saw and heard about some of the incredible work they do to help others. As a group we raised $88, and though this doesn’t sound like a lot of money, it is enough to train a new doctor in prosthetics.

An evening exploring the city and having dinner with travel friends ended our time in Laos. The subsequent morning we said a reluctant goodbye to our wonderful tour guide, Kami, and boarded a quick flight to neighbouring Cambodia. 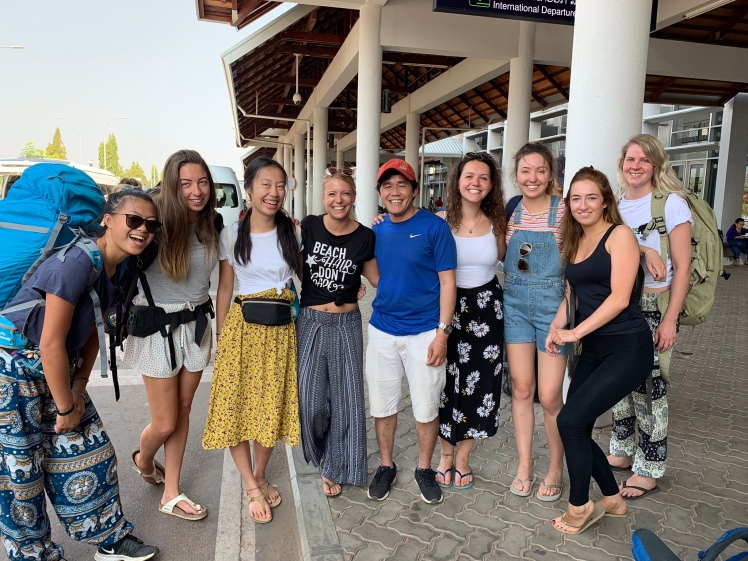 Lovely Laos had been a fantastic adventure and such a beautiful country, with really friendly people, exquisite landscapes and excellent architecture. However, before we knew it, it was time to move on to the next destination. Watch this space to find out all about my time in Cambodia!