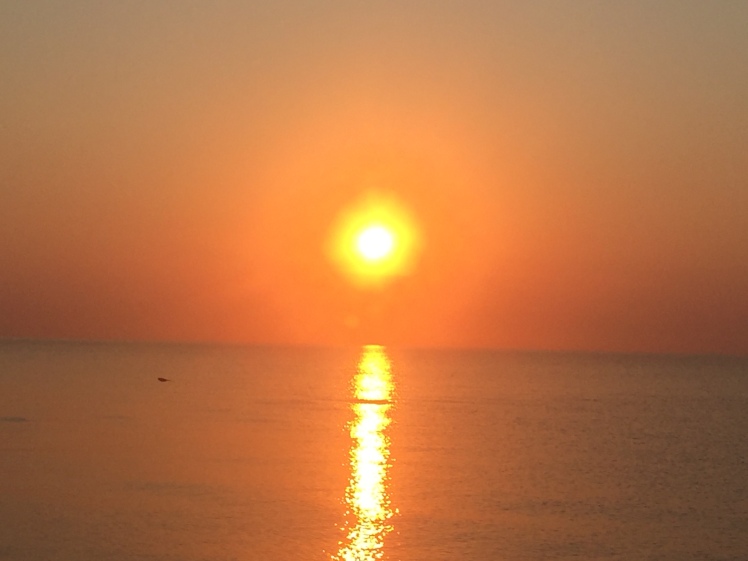 After a 5am wake up to watch our final Malawian sunrise, we began our departure out of the country through Nkotakhota National Park. At 1,800km² it is the largest, and also the oldest wildlife reserve in Malawi. Sadly, poaching almost eliminated all of the animals in the park, but in 2015 other reserves throughout Africa began to reintroduce animals to Nkotakhota; they have relocated 500 elephants thus far, with the intention of bringing many more types of animal in to the park, as well as enforcing new anti-poaching laws.

We crossed the border from the Malawian town of Mchinji into the Zambian city of Chipata.

With 800,000 inhabitants, Chipata is the third largest city in Zambia and the capital of the Eastern Province; its main exports are tobacco, cotton and maze and we saw a cotton factory just outside our campsite. Interestingly, it had been bought by Chinese owners. At our campground tonight there were four dogs and they provided endless entertainment, while we played cards and drank the night away in the camp’s friendly bar. I even found a red and white frog in the shower, which I was convinced was poisonous, but I live to tell the tale. 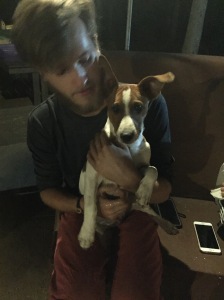 The following day began with one of our regular supermarket stops to buy supplies and our cashier was a flamboyant man called ‘Flashion’, which I remember thinking was a pretty interesting name!

We then drove to Mfuwe, South Luangwa and toured a crafts centre entitled ‘Tribal Textiles’. They showed us how they cut out fabric, mix the paint, draw and paint the designs, wash the fabric, scratch out the paint, bake the fabric and then sew them into cushions, duvet covers and similar. It was fascinating to watch, and every piece they sell is hand painted by local Zambian craftsmen and women. 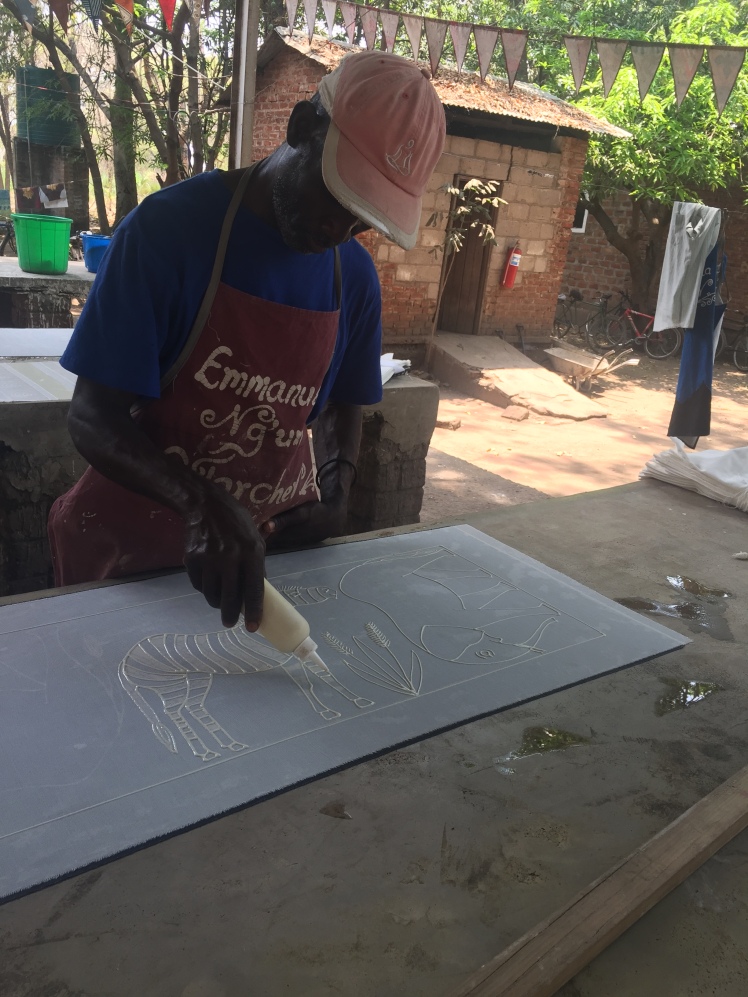 Founded in 1991, the company has grown from a small group of local artists to a successful international business which now employs and empowers over 100 people. Their textiles are a real pastiche of traditional African art mixed with contemporary designs and they take their inspiration from the surrounding wildlife. In a remote region of Zambia with high unemployment rates, Tribal Textiles is one of the biggest employers and has made a huge difference to the local community, with its commitment to providing sustainable employment, training and a good working environment to its staff.

I bought a beautiful pair of earrings which were made out of confiscated poachers’ equipment, with a percentage of the sales going towards the conservation of South Luangwa National Park.

Arriving into our campsite and idly assembling our tents in sticky solidarity, we were forced to acknowledge that there was a much more humid climate here and we rushed into our swimwear to cool off in the gratefully appreciated pool.

A few of us then gathered in our communal area to learn how to make chapatis with Justus. This was not before we were warned that this campsite was entirely amongst nature, with no barriers separating us from South Luangwa National Park. We were instructed to keep our tents locked and our eyes peeled for baboons, who would not hesitate to steal our snacks and unzip our tents to look for hidden treasures inside.

Just before we started preparing our chapatis, we were advised to head to the camouflaged viewpoint to witness some large wildlife heading towards it. We sneaked in soundlessly and watched the chaos that ensued in absolute wonderment: A solitary hippo was bathing peacefully in a muddy pool,  when a few herds of elephants came galumphing towards him, much to his annoyance. He made such an angry sound that it was almost comical and we genuinely thought a fight was about to break out. However, this didn’t perturb the elephants too much and while they backed off slightly, they didn’t leave the vicinity completely and instead flicked muddy water all over themselves to cool off from the heat of the day. There were elephants of all sizes taking a mud bath and the way they manoeuvred their trunks to splash each part of their body was very impressive.

Upon returning to our cooking area, we noticed that there was popcorn all over the ground. This was definitely not here before and we soon realised that some naughty baboons had approached and run off with our campmate’s snacks. They must have stayed in the proximity, because they soon returned and stole some carrots and a tomato that Joseph was washing, whilst his head was turned. We noticed that they were sitting around and eating their new feast and one of them even climbed onto our lando and had to be chased off. Our CEOs informed us that the locals would use slingshots to scare them away, which we practised doing (without hurting them of course), but these were some brave baboons, almost mocking us as they sat smugly, eating popcorn and veg. 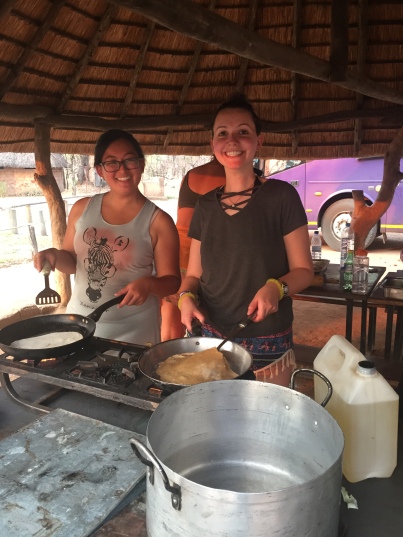 Finally, it was time to attempt to make our chapatis before the baboons tried to swipe these too. We rolled the mixture into thin, even circles and fried them like pancakes. They were fun to make as a team and dinner consisted of our homemade chapatis, beef, vegetables and pineapple whilst we regaled our campmates with stories of the afternoon’s commotion. Justus then spoke to us about his life in the Masai tribe and we felt privileged to hear his account first hand.

The subsequent day brought another early start, but it was an exciting one as we were going on a game drive in South Luangwa National Park. At 9,050km², it is home to many species of animal. We were fortunate enough to see: 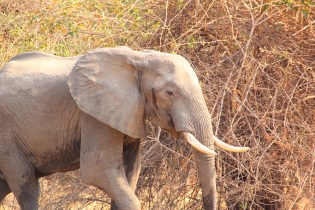 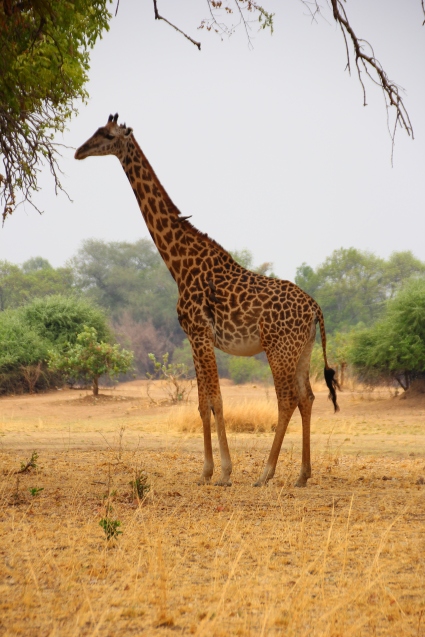 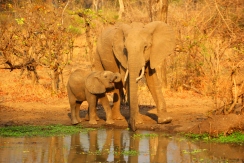 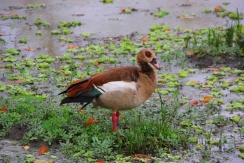 Halfway through our drive, we stopped for tea and coffee in the middle of the national park; though of course it was important that we kept a watchful eye on our surroundings. We asked our driver, Josephine to tell us the most dangerous thing she had encountered on her job as a park guide, and she confessed that she had once been licked on her foot by a lion! She had had to remain completely still and calm, which of course is a very impressive feat and luckily the lion had wandered off.

If a lion does kill a human, Josephine explained to us that the rangers sadly have to kill them, as humans are very addictive and they will otherwise search for more. Some other facts I learnt on this game drive include:

This game drive was full of stunning animals and a lot of enthralling information and we listened intently and watched the magnificent wildlife in its natural surroundings. Once again, I couldn’t help but feel really lucky to be witnessing such untouched beauty.

Speaking of natural beauty, in next week’s blog post I will take you through the time I spent at one of the seven natural wonders of the world: Victoria Falls. Watch this space!