The day began with a 3:30am wake up, as we had a 12 hour drive ahead of us. We saw the sun begin to rise when we departed from our campsite in the South Luangwa National Park and the sky glistened a brilliant bright red as we headed towards our next destination, Zambia’s capital and largest city, Lusaka.

Arriving into Eureka Camping Park that evening, we were met with zebras and some friendly locals using the campsite’s bar and pool area. One woman told me she would commute 30 minutes to swim in the freezing water, in order to cool off from the heat of the day and she prayed that one day she could visit England and enjoy our milder climate.

Though we were on day 18 of our tour and I was used to cold, dark showers by now, what I hadn’t yet experienced was a vast number of enormous, hairy-looking spiders inhabiting the shower block. These were tonight’s treat and I must admit, I did not enjoy their presence. One cautious shower and several games of cards later, it was time to hit the hay, ready for a 4 o’clock start the following morning.

The said morning came quickly and another early rise meant packing away our tents in the near darkness and readying ourselves for a lengthy drive once again. It was time for our next border crossing and today we were departing Zambia and driving into neighbouring Zimbabwe. As seemed to be the case with each of our border crossings, there was a lot of waiting around whilst our visas were processed and our passports thoroughly examined.

We exited Zambia through the town of Livingstone’s Mosi-oa-Tunya National Park, (which means “The Smoke That Thunders” in Lozi, a language used in Zambia, Zimbabwe and other neighbouring countries) and entered Zimbabwe through Victoria Falls National Park. Essentially this is the same national park in both countries and one can visit the waterfalls on both sides of the border. However, the indigenous name remains in use in Zambia, whilst in Zimbabwe they take the British name, after David Livingstone, a Scottish missionary and explorer was the first European to view Victoria Falls in 1855 and named his sighting in honour of Queen Victoria. Interestingly, the World Heritage List does officially recognise both names.

We drove past the Batoka Gorge and it wasn’t long before we arrived into our campsite, located on the edge of the national park.

We then had the opportunity to sign up for activities over the following two days and I opted for The Devil’s Pool; an ominous name, but a thrilling-sounding excursion!

Tonight we were sadly bidding farewell to our tour leaders and most of our group. Eight of us were staying together and travelling through Southern Africa with new tour guides, whilst some were going back to their respective home countries and others were continuing with our Chief Experience Officers, Justus and Joseph to Johannesburg. We had a final dinner and promised to stay in touch with the wonderful new friends we had made.

The following evening brought us new friends and we met eight more travellers, alongside Wellington and Judah, our new CEOs. After a welcoming meeting and an introductory dinner, it was time to sleep, ready to fully embrace Victoria Falls the subsequent morning.

The three of us who had decided to partake in the Devil’s Pool crossed the border back into Livingstone, Zambia, as this is where the activity took place.

We found ourselves at a rather fancy hotel, where we felt a little out of place after becoming accustomed to a life of camping! Here we seemed to sign our lives away on the necessary waivers and took a speedboat to Livingstone Island. 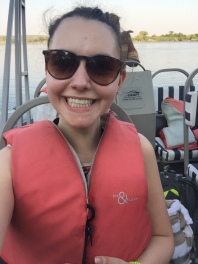 When its namesake first saw the falls he is said to have exclaimed, “scenes so lovely must have been gazed upon by angels in their flight” and he was certainly not wrong about the landscape being lovely; it was absolutely stunning to behold and I understood immediately why it was named one of the Seven Natural Wonders of the World. 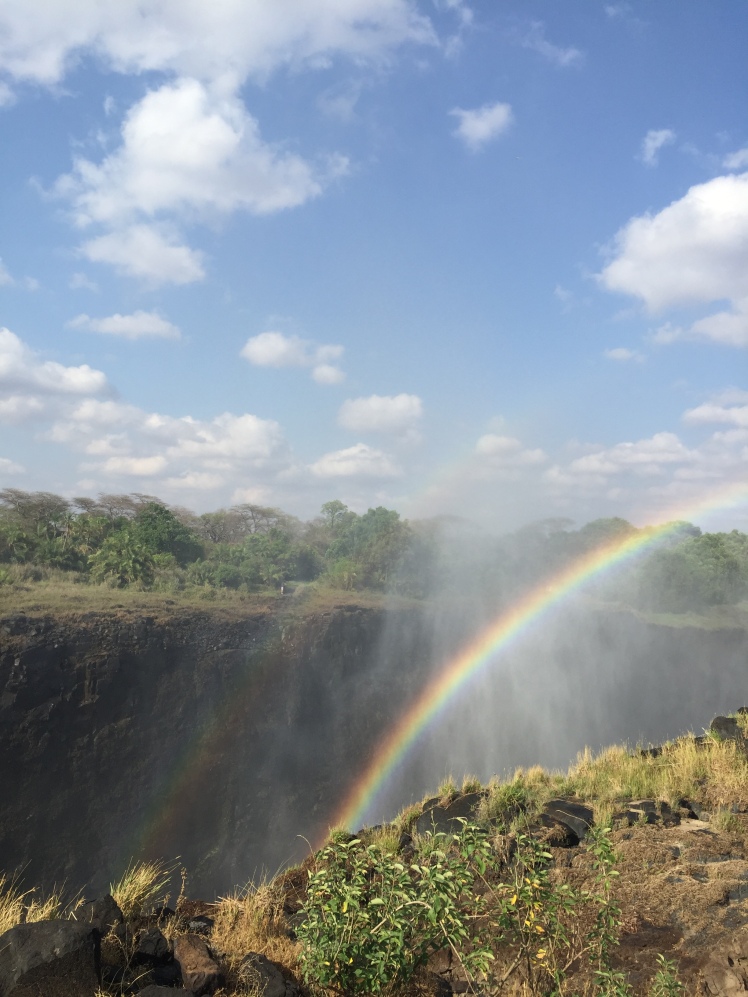 Upon discovering Victoria Falls, Livingstone also stated that the locals had used the names, ‘Seongo’ or ‘Chongwe’ to describe them, which aptly mean “The Place of the Rainbow” and are a result of the constant spray of water.

We walked towards the Devil’s Pool and swam to the edge, with small fish biting at our feet and being careful not to let the current drag us away from safety. The Devil’s Pool is a little section of the falls where you are able to lean over the edge, with an underwater ledge stopping you from falling in. One must still be extremely cautious though, as the current is strong and it is important to listen to the guides’ instructions. We took it in turns to look over the waterfall and witness life (literally) on the edge! One of the instructors took pictures of each person in the hundreds and the other (who had back-flipped into the water!) held our feet as we dangled over the side of the falls and told us how best to pose. It was exhilarating being so close to the edge of the cascading waterfall.

Struggling to keep my eyes open in the brightness! 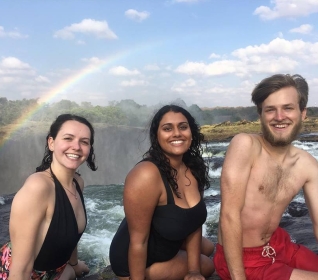 We were shown briefly around the falls and took a few more photos before having a delicious breakfast amongst the natural landscape. And breakfast wasn’t the only thing with a view…

The toilet above literally had no door, so your view was exquisite, but it was slightly unnerving – you were really hoping nobody on the other side of the falls was carrying a pair of binoculars!

Our breakfast and Devil’s Pool companions were all very friendly and we spoke to a man who used to live in Zimbabwe but was now based in the UK. He told us he could not wait to move back, but was hoping for the country’s unrest to soon reach an end. It was certainly interesting, and also harrowing to hear his perspective.

We sped back to mainland Livingstone on our boat and crossed the border into Zimbabwe.

After a very exciting start to the day, we spent the rest of the morning relaxing in the campsite’s living area, later joining some of our group on a walk to the Victoria Falls National Park. To enter you pay $30 USD, and this allowed us to tour all 15 of the falls.

The constant spray of water was very refreshing in the heat and we marvelled at the beauty and enjoyed walking around the 1,708 metres of waterfalls. Situated in the Zambezi River, the Victoria Falls are up to 108 metres high. Whilst they are not the highest or the widest waterfalls in the world, they are classified as the largest due to their height and width combined. 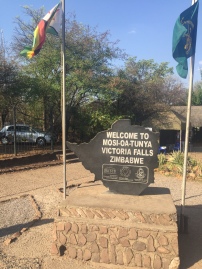 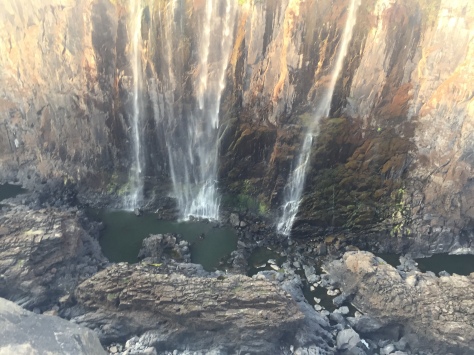 Click here to view my 360° virtual tour of Victoria Falls!

I felt so fortunate to have viewed the Victoria Falls; an intricate and impressive natural wonder. And I was now excited and ready to continue on this journey with friends, old and new. Next stop: Botswana! Please tune in next week to find out more…